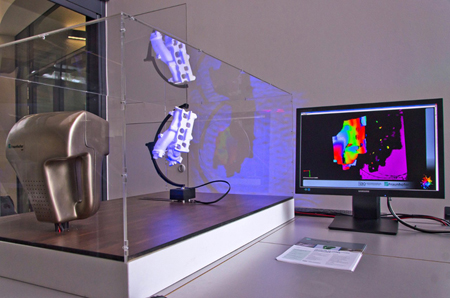 Capturing precise images of moving objects is a challenge for both photographic and engineering technologies such as are employed to inspect industrial products on production lines.

For example, if newly manufactured castings are transported on conveyor belts through assembly facilities, it is difficult to confirm the products' suitability for assembly as they speed past an observation point.

A new type of measurement system, developed in Germany, delivers up to 40 images per second - and these are three-dimensional. The researchers presented the system for the first time at LASER World of PHOTONICS 2013, held last week in Munich, Germany. The 3D measurement process will facilitate these kinds of analyses for engineers in the future.

Researchers at the Fraunhofer Institute for Applied Optics and Precision Engineering (IOF) in Jena jointly developed the technology with their colleagues in the neighboring Institute of Applied Optics at Friedrich Schiller University, Jena.

Peter Kühmstedt, Group Leader at Fraunhofer IOF commented, "Our non-contact three-dimensional measurement process works so fast that we can even produce high-quality imaging of dynamic processes."

Optical measurement itself is nothing new, of course. Previously, certain kinds of images such as stripes or multiple sequences of patterns have been projected onto the object to be measured. If the object was malformed, the image was correspondingly distorted - and action could be taken to redirect a malformed component.

Imaging experts can create a 3D representation of the object from about 10 different images projected sequentially. But the use of a digital video projector that creates digitized images for these projections usually means, however, that the imaging frequency is quite limited.

Usually a digital video projector can project about 60 images per second; and extraction of 180 2-D images per second is the conventional maximum. This is usually sufficient for "slow" manufacturing processes. However, this technique reaches its limits at higher speeds such as those of real-time quality control of components passing by on a production conveyor belt.

To achieve this performance, you only need a single photographic slide illuminated by an LED source. The resultant projection falls on a rotating mirror that directs it at right angles onto the object. Kühmstedt says the neat trick is that the mirror rotates on a skewed, tilted axis - so that it always directs an identical image onto the object in question, but at slightly differing angles.

The development team have already constructed a prototype based on LED illumination. In the next phase, the researchers say they are planning to progress to a laser-based model able to operate at even higher speeds.