Using a DVD drive as a laser scanning microscope could make blood analysis faster and cheaper. 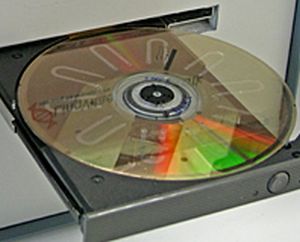 Early diagnosis of HIV infection is a key factor in subsequent treatment, so any new route to a reliable blood test is attractive. Even better would be a technique allowing the analysis to be carried out rapidly, in the field.

One established test for HIV is to measure the population of CD4+ T-helper cells - white blood cells with a particular surface protein morphology and a key role in the body's immune system. A healthy adult can have up to 1000 CD4+ cells per microliter of blood, but HIV infection can reduce that number to 200 or less.

Flow cytometry has been the method of choice for monitoring the number of these cells in a blood sample, but it is an expensive and relatively complex test, requiring trained personnel.

Now a much simpler and more convenient technique could be available, thanks to a breakthrough made at KTH Royal Institute of Technology in Stockholm, Sweden, and published in the RSC journal Lab on a Chip.

Aman Russom and a team at KTH converted a commercial DVD drive into a laser scanning microscope, able to analyze blood samples and perform cellular imaging. The breakthrough could lead to an inexpensive and simple-to-use tool, with far-reaching benefits for healthcare in the developing world.

"Using an ordinary DVD player, we have created a cheap analytical tool for DNA, RNA, proteins and even entire cells," said Russom. "The 'Lab-on-a-DVD' technology makes it possible to complete an HIV test in just a few minutes."

The system developed at KTH uses a disposable polymer disk as its sample holder, designed to fit into a standard DVD drive. Each disk is built from two half-disk substrates; the bottom portion includes all the operational information required to allow the disc to be read by a standard DVD drive, while the top half-disk contains fluidic microchannels pre-treated to promote attachment of the cells of interest to the channel walls.

Inside the drive itself an extra photodiode was added, built into the system on the opposite side of the disk from the 658 nm source, to complement the standard detector positioned as usual on the same side as the source.

This set-up can then record both transmitted and forward-scattered light, allowing a 2D image of particulates on the surface of the DVD channels to be built up by tracking changes in the absorbance and light-scattering observed.

As a proof-of-principle for HIV diagnostics, the team first applied it to the imaging of micron-sized polymer beads, before then demonstrating the specific detection of CD4+ cells direct from whole blood, along with single-cell resolution images.

The KTH system proved capable of imaging down to one micron, a figure stemming ultimately from the drive's optical specifications and the detection layer of the DVD disc, in which the linear distance between each spiral of the tracking path is 0.74 microns.

In theory the use of Blu-ray drives would enhance the resolution further, thanks to the shorter laser wavelength and larger numerical aperture. But Blu-ray drives are more expensive and have a shorter usable focal distance, mitigating against the kind of low-cost diagnostic platforms being pursued by KTH.

Russom commented that although the development of robust antibody coatings for the microfluidic channels was an important consideration, the most significant developmental barriers were posed by the optics aspects of the system.

"We already have more than ten years of experience in microfluidics, and understand how to manipulate tiny amounts of fluids in these kinds of channels. The challenges here involved getting the best out of the optics, and maintaining the built-in precision of the DVD scanner to deliver sub-micron resolution."

Now that the core principle has been proven, further developments could see automation of the various sample handling, staining and washing steps associated with a complete analysis. In an ideal scenario, a user would input the blood sample into a pre-modified disc and view the cell-count results without any additional steps.

In the meantime, the DVD-based platform already holds promise for affordable cellular testing in locations where resources are limited, as a straightforward point-of-care diagnosis.

"We started with HIV diagnostics as this is one of the grand challenges in bringing affordable health care to those who need it the most in developing countries, such as Sub-Saharan Africa," Russom commented. "However, the technology is quite versatile and can be adapted to other diseases without any major changes."

Applications could include diagnostics of malaria and other tropical diseases through detection of parasites in blood; or screening for blood proteins through antibody-antigen recognition.

"As a versatile platform, we hope this Lab-on-a-DVD approach will find applications in both developed and developing countries," said Russom.