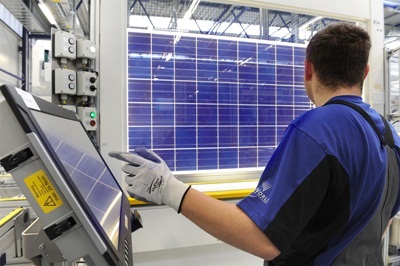 Despite the looming possibility of a photovoltaics (PV) trade war between Europe and China, two analyst companies are tipping the sector for a return to sanity and solid - if unspectacular - growth.

In the “most likely scenario” defined within its latest report, Lux Research predicts that the PV market will grow to 35 GW this year – up from 31 GW in 2012.

For an industry that, until last year, had become used to its market doubling year-on-year, that level of growth might seem modest. But for Lux, it represents something of a return to equilibrium and normality, and will enable the sector to “rise from the ashes” and grow steadily for the next five years.

In 2018, believes Lux’s Ed Cahill, the PV market will be worth $155 billion, as around 62 GW of new electricity-generating solar capacity is installed around the world.

“Manufacturers’ nightmare is turning into a long-term boon for the industry,” says Cahill. “Record low prices pushed gross margins to near zero or below, but they’ve made solar installations competitive in more markets.”

He added: “Supply and demand will come back into balance in 2015, easing price pressure, returning manufacturers to profitability and restoring the industry to equilibrium.”

Matching demand and capacity
Lux’s optimism for an industry that has been blighted over the past two years by monstrous overcapacity and seen dozens of suppliers either slide into bankruptcy or acquired for a relative pittance stems from the low prices that this overcapacity brought about.

The firm’s report highlights the example of the Miasolé, which was acquired by China-based Hanergy for just $30 million earlier this year after the thin-film PV specialist had previously raised more than half a billion dollars in capital.

“Record low prices from gross margins reaching near zero or below have made solar installations competitive in more markets,” the report states. “The US, China, Japan, and India will take over where Germany and Italy left off, driving global demand.”

“Low prices will also weed out uncompetitive manufacturers as consolidation reduces global capacity. Rising demand and falling capacity will bring the two within 12% of each other in 2015.”

And while capacity utilization rates will remain low overall, strong demand is expected for the higher-end, more efficient cells for deployments where space is at a premium. One key location for that is Japan, where the government has introduced generous incentives for PV installations.

That was the primary reason behind PV representing the largest source of new electricity-generating capacity in the European Union last year – with its 16.7 GW (peak) of installations ranking ahead of 11.9 GW in new wind power.

In its own future forecast, the EPIA predicts that the PV market could expand to anywhere between 48.3 GW and 84.2 GW by 2017 – depending on the level of government support provided.

China tariffs
According to Lux, China will by then have become the world’s single largest market, followed by the US.

The analyst company also predicts that utility-scale installations will grow at the fastest rate – rising from 8.6 GW last year to nearly 20 GW in 2018 as developing markets increasingly adopt the technology.

But all of those predictions will be influenced heavily by a potential trade spat between the European Commission and China that could see tariffs applied to Chinese solar imports to the region.

According to widespread media reports, the EC is considering implementation of punitive tariffs that would make Chinese imports at least 30% more expensive – though it appears that Germany’s Economy Minister Philipp Roesler would view that decision as a “grave mistake”.

The Washington-based Solar Energy Industries Association (SEIA) stated on May 20 that it was encouraging the US, Europe and China to enter into multilateral trade negotiations to end the existing dispute between the US and China, and prevent its escalation into the European PV market.

The US-China tariffs were imposed last year following a complaint by Germany-headquartered SolarWorld that Chinese imports were being “dumped” onto the market at below cost price.