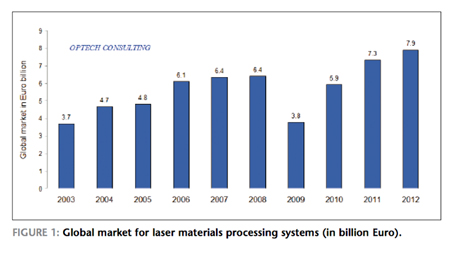 On the up: The global market for laser materials processing systems.

The global market for laser materials processing systems reached a new record high of €7.9 billion in 2012. Measured in euros the market grew 9 % over 2011, while measured in US-dollars the market grew only by 1 %. These observations and figures are from a new laser industry report from market analyst company Optech Consulting, Tägerwilen, Switzerland.

The key findings of the report were presented by Optech Consulting’s general manager Arnold Mayer last week at LASER World of Photonics, in Munich, Germany.

He said, “While the 2012 trend of the market measured in euro is positive, the picture is different for the US dollar-measured market. During 2012 the average value of the euro versus the dollar was 8 % lower than in 2011. The US dollar measured laser systems market grew by only 1 % in 2012 over 2011, to USD 10.2 billion.”

“Market growth varied strongly by region. The European market trended sideways in local currency. While the market showed healthy double-digit growth in the UK as well as in major economies in Eastern Europe, the demand level shrank further versus an already very low 2011 base in the recession-hit southern European countries.

”The North American market actually experienced double-digit growth. The demand for standard laser machines such as laser flat sheet metal cutters increased by more than 25 % in local currencies, and sales were substantially above the pre-crisis peak levels.”

Moving on to China, Mayer looked at how the erstwhile “dragon” economy has been impacted by relatively sluggish activity elsewhere: “As Europe is China’s major trading partner, Europe’s ailing economy has also slowed down Chinese exports. Together, the two regions account for nearly 50 % of the global consumption of laser materials processing systems. During 2012 economic expectations improved before decreasing again towards the end of the year.” 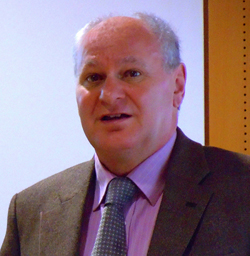 ”Booming” demand for mobile electronic devices such as smart phones and tablet PCs was once again a major market driver in laser materials processing in 2012. Mayer commented, “Laser processing is employed for the manufacture of key components such as displays, integrated circuits, and printed circuit boards, as well as for marking, cutting and welding of mechanical components.”

”Another hot topic is laser-based manufacturing in the automotive industry. While for a long time there was limited demand for lasers in high-profile applications, this has changed in recent years. Laser welding and cutting are increasingly used by the major automobile manufacturers and subcontractors.”

Optech Consulting has found that the automotive sector currently accounts for 15% of global laser systems consumption. The largest single share (40%) is held by the electronics sector. The balance is accounted for by a variety of industry sectors including job shops, with functions such as laser sheet metal processing.

The market for laser sources for materials processing accounted for €2.4 billion in 2012. As in previous years the demand grew strongly for fiber lasers and solid state lasers in general. Fiber lasers accounted for a market volume of more than €400 million, corresponding to an 18 % share of the total market. This compares to a share of only 10% in 2008. Overall, the market growth rate for fiber lasers in the last four years was 18 % (CAGR), strongly outpacing the growth of the total industrial laser market.

Turning to likely developments in the laser markets in the next several years, Mayer commented, “With a total volume of €7.9 billion the market for laser materials processing systems has reached a substantial size - corresponding to as much as 12 % of the world-wide machine tool market. Based on our market analysis Optech Consulting expects continued growth for the global market for laser materials processing systems at long-term growth rates in the high single digit range.“