Surgeons tell an application panel about the tissue-discriminating tools that they need to move endoscopy to a new, smarter level. 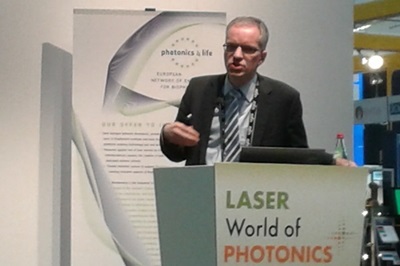 by Mike Hatcher in Munich
Surgeons addressing delegates at the LASER World of Photonics trade show in Munich expressed their need for “smarter” endoscopes with the capability of real-time detection of normal and abnormal cells.

Orlando Guntinas-Lichius, a head and neck surgeon at the University Hospital of Jena, said that there was a particularly urgent need for more functional endoscopes to investigate the upper parts of patients’ bodies, and described current technology as something “from the Middle Ages”.

While endoscopes have become indispensable tools for clinicians, Guntinas-Lichius said that the most important tool remains the surgeons’ eye, because the endoscope merely allows them a view inside the body, typically with simple white-light illumination.

Once major difficulty with a number of early-stage cancers of the mouth and throat is that they are relatively flat in nature, and do not infiltrate deep into surrounding tissue – meaning that conventional imaging techniques like CT and MRI scans are often unable to spot them.

That makes effective endoscopy hugely important for diagnosis, but Guntinas-Lichius said, “We would like more optical tools to show the extent of lesions, to highlight different tissue types,” adding that the same optical tool could then be used to help ensure the complete surgical removal of tumors.

A number of different optical techniques – among them autofluorescence, confocal laser microendoscopy (CLE) and laser-induced fluorescence – have already been tried. However, as yet none of them have been proved conclusively to provide a better diagnosis than standard endoscopy.

With 66,000 new cases of colorectal cancer in Germany alone each year, and 30,000 deaths from the disease, the need for early diagnosis is a stark one. But the pathway from pre-cancerous neoplastic polyps (or adenoma cells) to full-blown tumors is also well-understood, so a technique capable of reliably screening for adenoma or even earlier signs of abnormal tissue could have a huge impact on mortality rates.

Schmidt wants a fast and objective tool that will eliminate some of the human factors inherent to endoscopic diagnosis, such as a clinician’s level of experience, in particular so that neoplastic polyps – often missed during basic endoscopies - can be found and removed in a more reliable fashion.

One technique that both the surgeons are hopeful about is Raman spectroscopy, thanks to its ability to identify tissue types without the need for tissue staining.

Biochemical fingerprints
In the same panel session Jürgen Popp, scientific director of the Institute of Photonic Technology (IPHT), also in Jena, highlighted recent work to generate a statistical model based on the Raman spectroscopy of metastatic brain tumors. Though at an early stage, it appears that the approach can correctly predict the location of a primary tumor from the molecular fingerprint of the secondary tumor.

In other work, IPHT has shown how Raman could be effective in helping to diagnose and treat another major killer in the Western world – cardiovascular disease. Because of its molecular specificity, Raman is able to distinguish between lipids, proteins and collagen, and identify the precise nature of the different forms of plaque that build up in patients’ arteries that can ultimately block the flow of blood.

Popp said that it could be possible in the future to use a Raman tool in combination with optical coherence tomography (OCT), effectively providing a kind of optical “biopsy” on a diseased artery that simply cannot be performed with conventional methods.

While OCT is able to show very precisely the extent of plaque build-up in a coronary artery, it does not generate any specific chemical information in the way that Raman does. Working with Andreas Tünnemann’s laser research group, also in Jena, Popp’s IPHT team has recently developed a shoebox-sized Raman system based on a narrow-linewidth, 64 picosecond pulsed laser that clearly distinguishes between lipids and proteins, thanks to the different Raman responses of carbon-hydrogen bonds in the two types of biochemicals.