Focus on technologies, trends and markets leaves standing room only.

By Matthew Peach in Munich 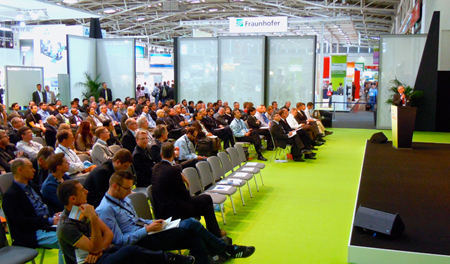 The three-hour afternoon session was divided into three distinct sections focused on diode pumped solid state lasers, fiber lasers, and ultrafast lasers, each of which featured a trio of academic-industrial experts mainly from German R&D or laser manufacturing sectors but also from Nufern (US) and the University of Southampton (UK).

Laser Conference favorite Prof. Dr. Andreas Tünnermann, Director of the Fraunhofer IOF, was overall chairman. He introduced the event and gave an impassioned presentation about the ever-growing importance to manufacturing industry of the latest solid-state lasers and more recently fiber laser sources, the power of which seems to grow exponentially with each Laser World of Photonics.

He commented, “In the past years, diode pumped solid state lasers have established themselves as an attractive and power scalable laser concept for various applications in science and industry. Using advanced fiber, disc, and slab laser geometries in continuous-wave operation output powers in the 10 kW-regime with electrical to optical efficiencies up to 30 percent have been demonstrated.

“And in pulsed operation kilowatt powers have now been reported even for femtosecond lasers. In this contribution the state of the art of science and technology in fiber lasers and amplifiers is reviewed. Market developments will also be discussed.” 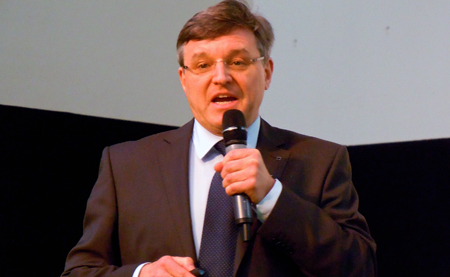 First of the DPSS-focused speakers was Dr Waldemar Sokolowski from Trumpf, whose presentation was entitled, “Multiple laser platforms for materials processing up to 1kW laser power”. He described industry’s increasing demands for more powerful, more versatile laser solutions, which fortunately for his bottom line, Trumpf has many new answers.

He commented, “What we have been hearing from industry is that many manufacturers are looking for a universal laser beam that is suitable for all types of materials processing. But of course, practice and the wide experience of Trumpf shows that, actually, all of the many diverse materials processing applications out there actually require different laser tools for different jobs.

He said, “There are so many variable factors, which mean that the solution may need to be different – such as type of material, material thickness, processing quality requirements and product geometry.”

Sokolowski then gave the substantial conference an overview of the latest product developments by his company including its range of different laser types: the Trudisk 1000, whose features include high insensitivity to back reflection, modular design, power scalability to 2kW, and suitability to “winter or tropical situations”.

The TruFiber 1000, although not power-upgradable, offers a wall plug efficiency of 30%, monolithic architecture and high back-reflectance tolerant; similar specifications to the TruDiode 903 system. Between them, these lasers can be deployed in a variety of application areas from brazing, welding, cutting, to deposition, hardening and additive manufacturing.” 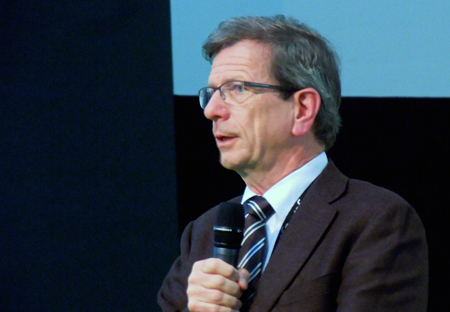 Adolf Giesen, Head of the Institute at the German Aerospace Center, Institute of Technical Physics, Stuttgart, described a range of advances in thin disk lasers.

“The commercialized state of the art in this area of technology can be divided into three key areas: high power multimode, pulsed thin disk lasers and smaller systems.

"In the first category, there are now highly multimode 10kW systems based on a single disk as well as various lower multi-kilowatt powers based on different geometries.

Giesen also announced a breakthrough in thin disk laser research and development, based on brand new research by the group of Peng, Lim, Cheng, Guo, Cheah and Lai at NTU Singapore. “This group’s paper, entitled ‘1.1kW Near Fundamental Mode Yb:YAG Thin Disk Laser’ is soon to be published in Optics Letters,” he told the conference.

He also made reference to Jenoptik’s recent development of its JenLas D2 femtosecond regenerative thin disk laser as well as the so-called Vary Disk from Dausinger and Giesen. On the research side, Giesen highlighted projects including at the Max Born Institute, which is aiming to achieve 1J, 5ps pulses with a Yb:YAG thin disk CPA system (550mJ achieved); and MPQ Garching, where researchers are apparently running a 28mJ 3kHz, 1.6ps thin disk laser in the same medium.

Giesen concluded that there is a positive outlook for thin disk laser innovation including several projects that look likely to deliver 100kW models, the likely development of high-power “eye-safe” models, and further energy scaling by coupling that should also achieve kilojoule outputs (Coherent).