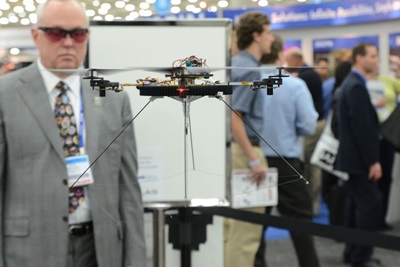 by Ford Burkhart in Baltimore
Tethered to a black fiber-optic cable supplying 70 W of laser power, a superlight micro helicopter, roughly the size of a medium pizza, flew using the power of light alone in demonstrations by Lasermotive at the SPIE Defense, Security and Sensing (DSS) exhibition in Baltimore.

Tom Nugent, president of the Kent, Washington, company, said that it was the first public flight of any vehicle using “laser power over fiber”. The four-bladed miniature “quadrocopter” carried a thumbnail-sized camera, showing the potential for future surveillance operations when the system is scaled up.

The current power level will step up to 400 W later this year, Nugent said, when the tiny model gives way to a working unmanned, multi-rotor copter, still small enough to stow in an SUV. Fighting strong winds, he said, will require that higher level of power.

The laser-powered drone will be marketed for military and civilian applications where currently a tower might support an overhead camera or a radio relay – thus, it’s called the InvisiTower. Nugent said his copter system could have shot pictures, for example, above the boat where a Boston Marathon bombing suspect was hiding from police -- or it could fly into a tunnel to view an incident and send back images.

The military could use it to provide base protection and anticipated users include first responders in need of a hovering platform for surveillance or communications relay, for what’s known in defense circles as ISR, for intelligence, surveillance and reconnaissance.

Vertical take-off and landing
The idea, in which a photovoltaic collector on the copter receives the near-infrared (808 nm) laser beam and converts it to DC power, has been around for years, Nugent said. But while others have run a device at only around one watt of laser power, delivered in free space, Lasermotive has developed the concept further. “No one’s done it at this scale and efficiency,” Nugent said. “What’s new is sending it through a fiberoptic cable.”

The vertical takeoff and landing (VTOL) system uses a multimode fiber, which has a larger core than that of typical communications fiber. Baltimore-based OFS provided that fiber, Nugent said, while Dilas supplied the high-power diode laser. The copter, an AR.drone model, was made by Parrot, of France, and weighs 450 grams.

The version flown at DSS had a range of only 15 feet from the laser source. But the full system should be able to fly a copter to a remote distance of about 1,000 feet.

Nugent said the military could face situations calling for “opto-isolated power.” “Some will ask, ‘Why not use a copper wire?’ Well, fiberoptic cable is lighter and safer than copper,” he said. “You run into a power line with copper, that’s a hazard. The fiber is safe.”

Copper wire is also heavier than optical fiber and would pose a risk near magnetic fields that could cause copper to overheat and blow up, he added.