Improved infrared sensitivity of laser-enhanced material could be used in night-vision goggles. 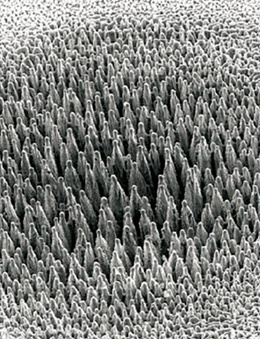 by Ford Burkhart in Baltimore
For sharp night vision, no one on the exhibition floor at SPIE's Defense, Security and Sensing (DSS) show in Baltimore seemed to beat SiOnyx. The CIA-backed start-up company, at its first public show ever, ran two videos of a dark night in the Massachusetts woods.

The images, captured using the firm’s so-called “black” silicon, are said to yield a sensitivity ten times that of an older, analog night vision system. Images recorded through night vision goggles featuring the technology could in the future be shared with soldiers throughout a battlefield.

The new material is a result of lasing the surface of silicon with an ultrafast laser, which turns it black. That enhances the material’s quantum efficiency in the near-infrared spectrum.

SiOnyx has now developed the technology in three optical formats – including a one-inch size for, say, an in-helmet device, to a one-third inch format for commercial uses, for example at an airport.

“It lets us image light that has not been seen by [conventional] silicon sensors,” said Martin Pralle, vice president for business development at the Beverly, Massachusetts, company that was founded by Harvard’s Eric Mazur and James Carey back in 2006.

Soldier networks
The image that a soldier sees can then be relayed to central command over a wireless network. “It lets the soldier be a node on a network at night,” said SiOnyx marketing director Stephen Noble. “Historically that hasn’t existed.”

The system can also image a target from various angles. “I can send it to my buddy,” Pralle said. “Tactically you gain major advantages by sharing imagery.”

In another setting, the imager could be placed on a remote weapon, while a soldier, looking at a networked display, can effectively “look around the corner.”

The SiOnyx sensor also has the sensitivity to track near-infrared laser spots that could indicate enemy target designation on the battlefield.

Security applications, for example in airports, could include crowd surveillance, where even in daylight SiOnyx’s enhanced sensitivity is an asset. “Iris detection is best done in near infrared,” Pralle said. “You are agnostic to pigmentation. Blue eyes, brown eyes, all look the same at 800 to 900 nanometers.”

The technology is also inherently passive, so would be unobtrusive. “There’s no reaction to infrared light, no flash needed. People don’t see it happening,” Pralle said. “This could be a covert application, if someone wants to scan bad guys who don’t want to be scanned. Our sensitivity uses less power, at greater standoff distances, up to three meters, to scan and get an iris reading.”

SiOnyx says that its new “XQE” range of image sensors, launched at the DSS event, are sampling in the current quarter, to customers interested in evaluating their use for next-generation imaging platforms.

Last August, the company signed a “strategic investment and technology development” agreement with In-Q-Tel, the venture investment wing of the US Central Intelligence Agency.

That deal was designed to help SiOnyx accelerate the integration of its “black silicon” sensors within imaging systems.