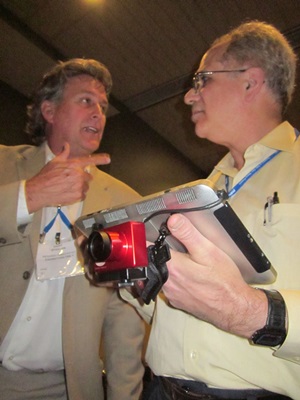 by Ford Burkhart in Baltimore
Potentially life-saving medical uses of thermal imagery are gaining interest in areas like breast cancer and diabetes, but it’s slow going since the techniques are often considered alternative medicine, an advocate told the SPIE Defense, Security and Sensing (DSS) symposium in Baltimore.

Gary Strahan, CEO of InfraredCamerasInc (ICI), in Beaumont, Texas, was speaking as part of the “ThermoSense: Thermal Infrared Applications” conference program track, which included other presentations on explosives detection and non-destructive imaging.

He said some pioneers worldwide are using images of heat as sources of information about medical conditions, including:

Pain: When a patient claims to have a painful back injury, thermography can reveal the location of inflammation, and therefore pain, Strahan said. “If you see a difference in the symmetry of the body, you can have a window into pain, and it’s nonintrusive.”

Diabetes: Thermal imaging can spot a lack of blood flow to the body’s extremities, a common feature in diabetic patients.

Inflammatory breast cancer: A lump in breast tissue can indicate cancer, but conventional mammography won’t find the inflammatory form of the disease, Strahan said. “Thermal will identify even small changes in inflammation.”

He added that thermal techniques can be used in conjunction with acupuncture, to track changes in the central nervous system, and to help locate a potential basal cell carcinoma or melanoma skin cancer.

“In an emergency room, why not image a patient’s body thermally right away?” asked Strahan, whose company has since 1995 made a wide range of thermal imaging systems, including some for hospital use.

He said that his company’s cameras had checked athletes at the Beijing Olympics to ensure that their body heat was not excessive. In the last Tour de France, a handheld version helped to check riders’ conditions.

ThermoSense conference co-chairman Greg Stockton welcomed the conflation of such technologies: “Nobody before has mounted an infrared camera on a tablet computer,” he said. “It’s a new and innovative form factor. In the late 80s, we thermographers were using infrared cameras that had to be mounted on carts, because they weighed as much as 90 pounds.”

“It is exciting because it’s lighter and smaller, you can detach the camera, it’s high resolution and very portable,” added Jack Kleinfeld, a consulting engineer from New York. “It would do almost everything, field work for buildings, manufacturing process analysis.”

Stress indicators for surveillance
An earlier session in the same conference track heard how thermal imaging can detect physiological indicators of stress. Researchers from Wright State University analyzed facial changes that could point to a sudden shift in the mental state of a suspected criminal, or help spot someone with a health emergency.

Using 84 tracking points on or near the face, they developed a map of areas where changes spotted by thermal imagery can point the police to a potential criminal about to take action. Among the features that were most revealing of stress were temperature patterns in the neck and lower cheeks.

Measurements around the nostrils and neck, near the carotid artery, also offered clues to breathing patterns and heart rates. They were accurate at a stand-off distance of about 5 to 10 feet.

The research, led by Julie A. Skipper, an associate research professor with the Wright State Research Institute, was sponsored by the Ohio-based I/UCRC Center for Surveillance Research. Sponsors of previous related work include the Office of Naval Research and the US Army Research Laboratory.

Could the techniques have helped spot the Boston Marathon bombers? Skipper said the pair were “exactly the types of individuals we aim to identify” but warned: “Watching for anomalies in a large crowd is an inherently difficult surveillance scenario. By combining our technology with existing screening tools, however, we may begin to bridge the gaps and transition to a fieldable system.”