Stock down nearly 20% as the laser annealing and lithography tool vendor puts a freeze on new hires and cuts executive salaries. 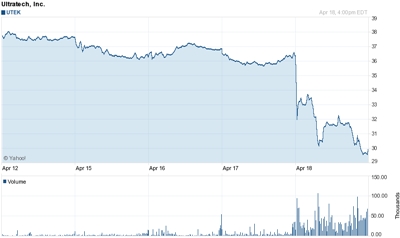 Shares in Ultratech slumped in value by 18% after the company said in its first-quarter financial results that key customers had suddenly entered a “pause” mode that would last for two quarters.

Citing confusion in the logic portion of the semiconductor industry, the San Jose, California, company has in the meantime initiated a hiring freeze, cut back its build plan, slashed executive pay and will shut down facilities for a week in late May.

At first glance the latest results from the provider of laser and lithography tools used in semiconductor device production look positive enough. At $60.6 million, sales were up 22% on the same period last year, while net income of $13.7 million was also up strongly.

However, CEO Arthur Zafiropoulo warned investors that the company had been hit in recent weeks by growing uncertainty over exactly which semiconductor technologies would be selected by device manufacturing customers for future applications in smart phone and tablet applications.

“We believe based on our current information that our business will be in a pause mode for the next couple of quarters,” he told an investor conference call. That “pause” is the knock-on effect of some difficult choices currently facing makers of logic chips.

They are in a period of transition from making traditional planar transistors to new three-dimensional designs called “FinFETs”. Although they offer great advantages in terms of the cost per transistor, the problem is that the new devices are proving difficult to manufacture with high yields.

Transistor confusion
Exactly when FinFET designs will be introduced remains uncertain – Zafiropoulo believes that some may even turn to a hybrid planar/FinFET design to reduce risks – and this means that the device makers do not yet know exactly which configuration of manufacturing equipment they will need, or when. For Ultratech, it means that plans to install laser spike annealing (LSA) tools currently on order will be on ice until that question is resolved.

“The company that attains good and consistent yields on FinFETs will have an excellent chance to win a major market share position from manufacturers of advanced smartphones and tablets,” said the CEO, although he added that the problem is being compounded by the additional question of which logic foundry will be selected by Apple and Qualcomm for their future requirements.

“There is a great deal of speculation but, obviously, the risk in making the correct decision is critical,” he added. “If a mistake is made in the decision of which device node to make and the toolset needed, the effects in business for those involved could be significant.”

Ultratech’s CFO Bruce Wright expanded on the effect that these dilemmas were having on the company’s business, saying that the impact had been more sudden than he had anticipated.

“The current state of affairs in the sector is one of general confusion, with extremely limited visibility,” he told investors. “Based on the information we have today, we believe that this customer pause will last a couple of quarters.”

Wright added that equipment makers would be “in the dark” until those key decisions are taken by Apple, Qualcomm and their logic chip suppliers, at which point things should clear up rapidly. “Simply stated, our customers just don’t know what their near-term future looks like and so we don’t know when or what we need to build for them,” he said.

Executive salary cuts
Aside from a freeze on hiring and shutting down during the Memorial Day holiday week in late May, Wright said that Ultratech’s senior managers had taken a salary cut, with company officers’ pay slashed by up to 25%.

But the CFO said that he would maintain spending on research and development activity as planned, and, along with Zafiropoulo, stressed than things look very positive in the longer term.

“Riding out the pause period is likely to be somewhat painful, [but] we are very pleased with where Ultratech is positioned in all its product areas,” the CFO said, pointing out that Ultratech has orders for 18 of its LSA tools that were set to be delivered over the next couple of years, and that customers were pushing out orders rather than cancelling them.

CEO Zafiropoulo added: “The industry has accepted laser anneal technology, and it is not if, but when, additional volume system orders with firm releases will occur.”

Though unable to give financial guidance for the full year, saying that any estimate would be a “total guess”, and even citing Q2 guidance as “questionable”, Wright said that sales would likely decline by around 25% sequentially.