Transition to solid-state lighting includes deal to retrofit much of the Paris Metro system. 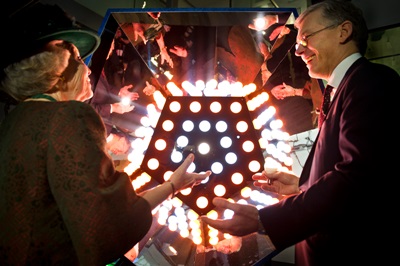 Consumer, healthcare and lighting giant Philips has reported a 38% surge in quarterly sales of LED-based products compared with a year ago, with the solid-state technology now accounting for nearly a quarter of its lighting business.

But in the first financial quarter of 2013, Philips’ lighting division posted sales revenues of €1.98 billion – down slightly on the overall figure in the same period of 2012, and indicating that the LED boom is being offset by declining sales of conventional lighting.

Philips CEO Frans van Houten blamed the flat overall performance of the lighting business on weak construction markets, but the transition to solid-state technology is clearer than ever, and accounted for 23% of the division’s sales in the quarter.

Having last week revealed a prototype 200 lumen-per-watt LED technology with the potential to radically increase lighting efficiency way beyond that already demonstrated, Philips also highlighted a number of high-profile projects where solid-state lighting is set to be installed.

They include the Paris Metro and RER railway network, where the Dutch company has won a contract to switch “the majority” of stations to LED light sources; halving energy consumption while improving lighting quality.

Philips is also set to upgrade more than 1500 buildings belonging to the South African communications company Telkom, and has struck a deal to light up a series of building facades in the heart of the Russian capital Moscow.

Rivals Osram and Cree both launched low-cost LED-based replacements for 40 W incandescent bulbs recently, while the Californian start-up Soraa is looking to make an impact with its new LED replacement for dimmable halogen bulbs.

Philips reckons that by 2015 LEDs will account for some 45% of a lighting market by then expected to be worth between €75 billion and €80 billion (excluding automotive lighting).

And after a difficult period for all LED chip makers, in which the emergence of a large number of Chinese suppliers caused a market glut, things do appear to be looking up. Lumileds, Philips’ own Silicon Valley based chip-manufacturing subsidiary, registered double-digit growth in the opening quarter of 2013 and is expected to be profitable this year.

Growing fruit with more vitamin C
Along with the rest of the lighting industry, Philips will be showing off its latest product developments at the Lightfair International trade show, which is taking place this week in Philadelphia.

Last week the company said that it had kicked off no fewer than eight new research projects in the area of LED lighting, under the five-year, €3 million-funded “Advanced Sustainable Lighting Solutions” partnership with the Dutch government’s Technology Foundation STW.

Those projects include an attempt to develop more efficient green emitters by incorporating aluminum gallium phosphide (AlGaP) nanowires into the semiconductor layer structure, another aimed at using cadmium-free quantum dots as phosphor downcoverters, and the application of LED lighting to increase the vitamin C content in growing fruit.