After more than eight years as CEO of the lithography company, Eric Meurice will become chairman of ASML Holdings in July. 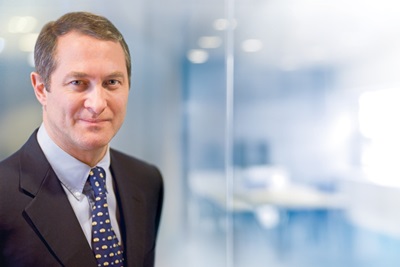 Eric Meurice, president and CEO at the lithography giant ASML, is to step down from the position in July, with current CFO Peter Wennink set to take on the leadership role.

The management change, described as an “orderly transition”, will see Meurice – who became CEO in October 2004 – become chairman of ASML’s holding company until next March, when his employment contract expires.

While Wennink will become the new CEO, current CTO Martin van den Brink will assume the role of president at the Netherlands-headquartered firm, which is the world’s largest provider of lithography equipment to semiconductor chip manufacturers.

The change comes as ASML nears completion of its planned merger with key light source supplier Cymer. Having now received clearance from the US Department of Justice, that deal is expected to be completed before the end of June.

At his final quarterly earnings conference call as ASML chief, a noticeably jovial Meurice fielded numerous investor queries about the progress being made with the company’s development of extreme ultraviolet (EUV) production tools.

He reiterated the development revealed at the recent SPIE Advanced Lithography conference, where soon-to-be subsidiary Cymer said that it had pushed EUV power to the 55 W level. “That is significant progress,” Meurice said, adding that it would support reliable production at a rate of 43 wafers per hour. 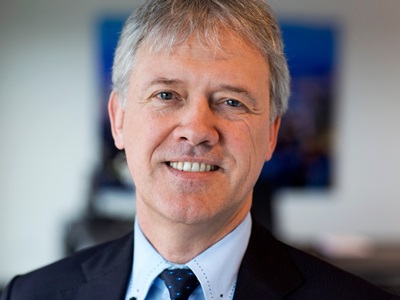 EUV targets
For ASML, the target is to provide a source capable of supporting 59 wafers per hour production in 2014, when its chipmaker customers begin using the technology, and ultimately raise that to 125 wafers per hour in 2016.

ASML is still enduring delays with EUV, though Meurice said that this was now due to supply chain issues rather than fundamental problems with the source power level – problems that appear to have been overcome since the introduction of a master-oscillator power amplifier (MOPA) and “pre-pulse” laser concept.

“EUV technology industrialization continues to make steady progress on the trajectory set with the introduction of the improved source concept last year,” said Meurice. “Firstly, the EUV light sources have now been demonstrated at 55 W with adequate dose control; second, the scanners themselves have demonstrated production-worthy, 10 nm node-compatible imaging and overlay specifications. We therefore confirm our expectation of the ramp of EUV-enabled semiconductor production in 2015.”

Over the next 18 months, ASML expects to ship an average one EUV production scanner per month, but will only recognize revenue of €280 million – relating to the shipment of four of the tools – in fiscal 2013, because of the previous delays experienced.

In 2015, unit shipments are set to rise to between 25 and 30, before doubling to 60 the following year as the era of EUV lithography gets truly under way. By then, the tools are expected to sell for an average €100 million each. 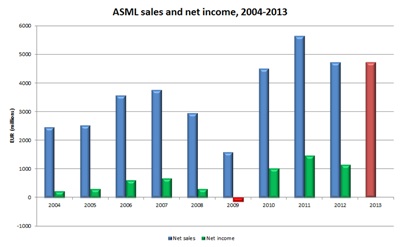 Acceleration of interest
The ramp of the technology represents an important new market for various photonics companies because of the need to use high-power carbon dioxide lasers to generate EUV-emitting plasmas. In turn, those lasers demand ultra-robust diamond optics that are being provided by specialist suppliers such as II-VI and Element Six.

“There has been an acceleration of interest in EUV,” Meurice told investors, and while that may not have yet translated to firm bookings for the equipment maker, the outgoing CEO told investors that discussions with customers had intensified recently while progress with the sources became evident.

Wennink added that closing the Cymer deal would aid the company as it industrialized source production in advance of the ramp required for the 2015 and 2016 targets.

Looking even longer term, ASML has now developed concepts for the architecture of its future EUV and immersion lithography tools for patterning 450 mm diameter silicon wafers. That technology remains at a very early stage, however, with prototypes slated for 2015 ahead of a production ramp in 2018 – provided that the industry agrees.

That represented a decrease of nearly 30% from the same period last year and ASML’s lowest first-quarter revenue figure since emerging from the global financial crisis in 2010. But Meurice believes that with demand starting to grow in the memory sector sales will rise to around €1.1 billion in the current quarter, while the second half of this year is expected to be much stronger than the current period.

When France-born Meurice replaced the retiring Doug Dunn as CEO of the firm back in 2004, ASML’s annual sales stood at just under €2.5 billion, with a net profit of €235 million.

By the company’s record-breaking year of 2011, that sales figure had shot up to €5.65 billion, and net income of €1.5 billion. The current prediction for this year is that sales will be around €4.7 billion – flat with the 2012 figure.