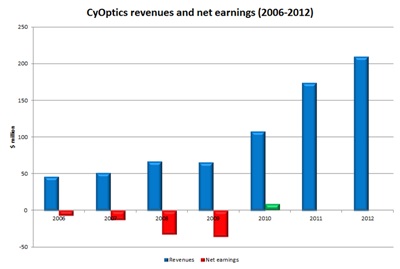 The deal, which still needs to be ratified by US regulators, follows a sharp recent uptick in fortunes for the Pennsylvania company. Following years of heavy losses, CyOptics swung to a net profit in 2010 and has nearly doubled its revenues since.

Avago is aiming to exploit the company’s single mode laser and detector technologies in the fast-growing data center interconnect business, where there is escalating demand for longer-reach high-speed cables as internet traffic continues to spiral.

Whereas Avago’s existing products are typically based around VCSEL sources, CyOptics is seen as having higher-end technologies that are complementary to the existing portfolio. Avago also sees an opportunity to play in the emerging field of silicon photonics through the deal.

Silicon photonics potential
In a conference call arranged to discuss the acquisition with investors, Tan expanded a little on that theme, saying: “CyOptics is a major industry supplier of lasers for several silicon photonic solutions. Along with Avago's packaging expertise and scale, CyOptics will give Avago an opportunity to support the silicon photonics industry with differentiated laser sources and platforms.”

Tan added that a number of OEMs rely on CyOptics' lasers and receivers to serve the fiber-to-the-home market in China, a fast-growing market that doubled over the past two years to approximately 39 million units in 2012, the CEO said.

The cash deal appears to represent a successful exit for investors including Jerusalem Venture Partners, which according to recent US Securities & Exchange Commission filings owns nearly 55% of CyOptics.

Founded at the peak of the pre-millennial telecoms bubble in 1999, one of the key milestones in CyOptics’ history was its 2005 acquisition of the optoelectronics division belonging to TriQuint Semiconductor – a highly regarded technical unit that previously belonged to Bell Laboratories and spin-out Lucent Technologies.

Rapid revenue growth
The firm’s most recent injection of capital arrived in early 2011, when CyOptics closed a $50 million round of financing that also saw a repurchase of stock owned by the Italian industrial giant Pirelli, which had invested $20 million in the company back in 2008.

Following that, CyOptics’ investors had sought to raise further cash through a planned initial public offering (IPO) of stock. Filings associated with that move revealed that the company had suffered significant financial losses in both 2008 and 2009, but had posted a net profit of $8.9 million in 2010 as revenues jumped 65% year-on-year to $108.3 million.

The rapid rate of sales growth has continued since then, with Avago revealing that CyOptics posted revenues of $174 million in 2011 and $210 million in 2012.

According to the 2011 filings, Finisar represented CyOptics’ largest customer at that point, accounting for 15% of company revenues in 2010.

Ed Coringrato, the long-time CEO of CyOptics, said in a statement: "We are delighted to join Avago Technologies, a company with a long history of innovation and a strong position in the wired infrastructure market. We believe this transaction presents tremendous opportunities for our customers and our employees."

Avago would appear to have no trouble in funding the acquisition. Thanks partly to its IPO in 2009, which raised around $650 million, and partly to profits generated since then, the company held more than $1.1 billion in cash on its balance sheet prior to the deal.