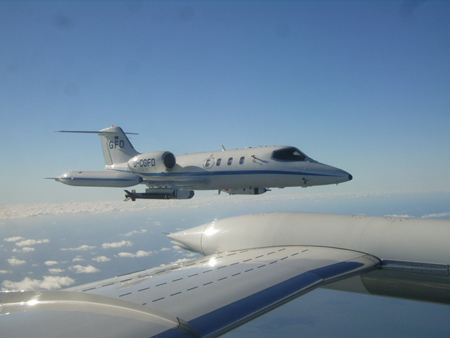 We have lift-off: PTB's laser hygrometer successfully completed 7 flights on a Learjet.

A humidity sensor developed by Braunschweig, Germany-based Physikalisch-Technische Bundesanstalt (PTB), called the SEALDH laser hygrometer, meets all standards to be used as a transfer standard for conventional humidity-measuring instruments.

The PTB scientists say that this means the system improves the quality of air humidity measurements in the Earth's atmosphere – and, therefore also climate model computations.

Humidity measurements in the atmosphere are important, since water vapor, as the key naturally occurring greenhouse gas, has a strong influence on the Earth's atmospheric radiation balance and therefore the overall climate. Water is also responsible for meteorological phenomena such as the formation of clouds and precipitation.

Furthermore atmospheric water content is an essential measurand for all climate models and for weather forecasting. However, measuring water vapor content of the upper atmosphere is difficult, which means air humidity measurements often vary by +/-10% when measured by different methods.

During its in-flight operation, the laser hygrometer proved a detection limit in the ppm range, a very large measuring range between 25ppm and 25,000ppm of water volume fraction, as well as excellent temporal resolution below 1s. The PTB scientists have compared SEALDH with PTB's own national humidity standard and attained a mean deviation of less than 2%. SEALDH is also self-calibrating, which PTB says differentiates it from conventional hygrometers.

SEALDH has now been tested under field conditions within the scope of a scientific mission on a Learjet 35A, a former passenger plane adapted for research; it demonstrated reliable performance over seven flights as well as passing a blind test with several established aircraft hygrometers at the environmental simulation chamber of Forschungszentrum Jülich, near Aachen, Germany.