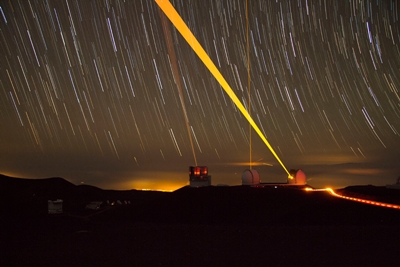 Hawaii’s W. M. Keck Observatory has raised $4 million to pay for an adaptive optics upgrade – with the funding provided entirely through philanthropic grants and individual gifts.

The upgrade, which will be based around the installation of a new laser guide star, will dramatically improve the images produced by the 10 meter telescope by reducing the effect of the Earth’s atmosphere.

The Gordon and Betty Moore Foundation, the W. M. Keck Foundation and The Bob & Renee Parsons Foundation awarded three grants totaling $3.7 million, with the remainder coming from individual gifts from Friends of the Keck Observatory.

“We’re thrilled to support the Keck II Laser Guide Star Adaptive Optics, because we believe in the inherent value of science and the importance of basic research,” said Cyndi Atherton, program director for science at the Moore Foundation. “Upgrading the Keck II instruments will help us answer — and even think of new ways to ask — fascinating and significant questions about our universe and the place we occupy within it.”

Peter Wizinowich, who leads the development of adaptive optics at Keck, added: “In theory, the larger the telescope, the more detail you can see. However, because of the blurring caused by Earth’s atmosphere, a 10-inch or a 10-meter telescope sees about the same amount of detail.”

AO innovation at Keck
At the moment, the Keck Observatory is home to the two biggest optical telescopes in the world – though that will change if the European Southern Observatory’s “Extremely Large Telescope” (ELT) project progresses as planned.

Teams at Keck have been some of the early innovators in adaptive optics, and commissioned the observatory’s first large laser guide star adaptive (LGS-AO) system on Keck II back in 2004. It is described by the observatory as "the most productive LGS AO system in astrophysics, responsible for 70% of the refereed-science papers using laser AO published to date".

The current system fires a 13 W pulsed dye laser beam at sodium atoms in the mesosphere, 90 kilometers above the surface of the Earth. Fluorescence from the atoms creates an artificial “star” the same yellow color as a sodium streetlamp. The image of the guide star can be corrected for atmospheric distortion using a deformable mirror, and in turn images of the night sky can be sharpened by up to a factor of 20.

Keck’s existing LGS AO system was instrumental in UCLA astronomer Andrea Ghez’s pioneering work in characterizing the super-massive black hole and several important stars at the center of our Milky Way galaxy, a discovery that earned Ghez the Crafoord Prize in Astronomy in 2012.

Fiber upgrade
The new laser, designed in a collaboration with ESO, Germany-based Toptica Photonics and the Canadian fiber laser specialist MPB Communications, sees a power upgrade to a continuous 20 W beam that will increase the coupling efficiency over the current laser by more than 15 times and improve the relative Strehl ratio (a standard measure of optical image quality) by a factor of about two. It will be commissioned in mid-2015.

In 2010, Toptica won a €5.2 million, three-year contract to develop the solid-state, 589 nm laser, which is based on frequency-doubling of an MPB Raman fiber amplifier that operates at 1178nm (for full details see Toptica's SodiumStar 20/2 brochure. Four of the lasers are due to be installed in the ESO’s Very Large Telescope in Chile.

Once armed with the new LGS AO system, astronomers at Keck plan to study so-called “brown dwarf” and other low-mass stars, objects whose sizes are more akin to planets. In addition, it should enable more precise measurements of stars orbiting closest to the super-massive black holes, improve our understanding of the origins of gamma-ray bursts and supernovae, and allow a closer look at objects within our own solar system such as distant Kuiper Belt Objects, or observing the weather on Uranus.

“This is the first time private philanthropy will fund an instrument project for us in its entirety,” said Taft Armandroff, the Keck Observatory’s director. “They clearly see the value putting their resources into the Keck Observatory, and for that, we are delighted.” A combination of federal grants and private support fund most of the technology enhancements to the Observatory.