The versatile new source dramatically improves the scan rates and imaging range of the technique. 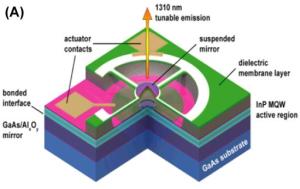 The source is the product of a joint development project by Thorlabs, Praevium Research and MIT, also supported by the National Institutes of Health Cancer and Eye Institutes (NCI and NEI), and is now heading for commercialization.

Speaking at the BiOS Hot Topics session at Photonics West in February, Ben Potsaid of Thorlabs and MIT described how the source achieved its fast scan rates and tunable output through close control of the laser cavity.

"The tunable VCSEL employs an electrostatic MEMS actuator to control the laser cavity length, in a monolithic design," he said. "A fixed mirror forms the bottom of the laser cavity, while a suspended mirror forms the top. The charging of a capacitive plate results in an attractive force that pulls the suspended mirror down and shortens the cavity, thereby tuning the source to emit a shorter wavelength of light. By driving the actuator with specially shaped voltage waveforms, the laser wavelength can be swept in time as required for swept source OCT."

Prototype 1065 nm and 1310 nm devices have been demonstrated, and shown to deliver true single longitudinal-mode light and mode-hop-free wavelength tuning.

The MEMS actuator is also very fast, allowing the micron-scale cavity length to be tuned rapidly. The device has demonstrated a fundamental repetition rate of 600 kHz, which for OCT purposes allows the individual A-scans to be acquired at rates as high as 1.2 MHz through the use of both forwards and backwards sweeps. This is as much as fifty times faster than standard commercial systems, according to the researchers.

Fast scan rates are important, as they allow large data sets to be captured even in applications where acquisition time is limited, as is the case for ophthalmic, intravascular and endoscopic imaging. They also enable large and densely sampled data sets to be acquired for comprehensive tissue coverage.

Practical examples include ophthalmology, where a 1.2 MHz A-scan rate can obtain a large scan of the retina before a patient blinks or involuntarily moves the eye. Another is cancer studies, where the team has demonstrated the imaging of rabbit esophagus, colon, and stomach at 1 MHz A-scan rates using a miniaturized OCT probe, as a translational step towards using the tunable VCSEL for human endoscopic cancer imaging.

From millimeters to meters
The VCSEL also delivers significant improvements in the usable imaging depth, combating the drop-off in sensitivity at larger depths that is an inherent challenge in spectrometer-based OCT detection methods or spectral-domain OCT. 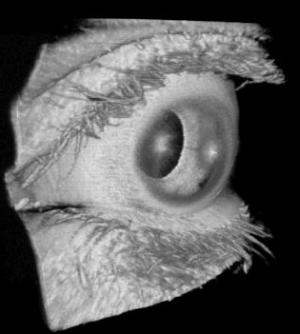 In clinical ophthalmology, this limitation is so significant over only a few millimeters of imaging range that clinicians must often choose to image either the top or bottom of the retina, since they cannot simultaneously image over a longer depth range with good sensitivity. But the new source shows very different behavior.

"The tunable narrow line width and single longitudinal mode tuning make it possible to rapidly measure structures at distances that were previously inconceivable," commented Potsaid. "Because of the long coherence length of the laser, the signal remains at a consistent amplitude with very little drop off at distances well in excess of the several millimeters of imaging commonly performed today."

Striking examples shown at Photonics West included 3D OCT imaging of an optical post over a distance of 15.2 cm with a 25 kHz A-scan rate; and of bullets submerged in a gel solution at 8 cm distance with the same scan rate.

The longest object measured, although not strictly imaged, in the team's laboratory to date is a 1.5 meter optical-path-length fiber optic cable at 20 kHz scan rate, measured in a single pass, non-imaging, interferometer configuration. A recently published paper in Optics Letters describes these experiments in detail.

"Even at a record distance of 1.5 m in air, the drop-off is only -10 dB; a result which dwarfs other imaging technologies in comparison," noted Potsaid.

Imaging the full length of the eye
In real-world swept-source OCT applications, the performance of the system's A/D converter imposes a fundamental limit on what can be achieved, but within those constraints the ability to modify the new VCSEL's sweep trajectory and scan rate makes it flexible enough to suit a number of imaging scenarios.

"In an ophthalmic context, the VCSEL has demonstrated retinal scanning at an A-scan rate of 580 kHz with a wavelength tuning range of 83 nm and axial resolution of 8.9 microns in tissue, providing an image range appropriate for retinal imaging," said Potsaid. "Scanning the anterior eye requires a longer imaging range, but this is achievable without compromising resolution by configuring the same VCSEL to run slower while maintaining the same spectral sweep range."

To go further still and image the full length of the eye, the VCSEL can be slowed down to 50 kHz and the wavelength tuning range reduced to 45 nm. This does compromise the resolution slightly, but delivers an imaging range sufficient to include the entire length of the eye, from cornea to retina.

Such versatility could open up a number of potential new applications. "Industrial manufacturing could benefit from real-time 3D part inspection and surface profilometry, to aid in assembly or quality control," noted Potsaid. "In biomedicine, the extended imaging range may enable 3D morphological characterization of large anatomical features, such as the upper airway, which is important for understanding and possibly treating sleep apnea. It may also be used for real-time visualization and guidance of surgery, either performed by a human or under robotic control."

While the research team continues to develop and demonstrate VCSEL systems and applications, Thorlabs is commercializing the technology to be offered in either a complete OCT imaging system, bench-top laser source, or as a swept source for system integration by original equipment manufacturers.