US Air Force sends another geosynchronous satellite for “SBIRS” into orbit. 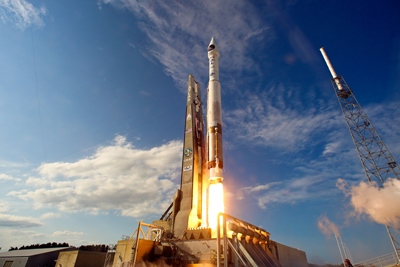 GEO-2 blasts off in Florida

The US Air Force has launched into orbit the second geosynchronous satellite required for its Space Based Infrared System (SBIRS) constellation.

Blasting off yesterday from Space Launch Complex 41 at Cape Canaveral in Florida, the capabilities of the “GEO-2” payload are part of a multi-satellite system set to result in a major upgrade to the US military’s overhead infrared surveillance capabilities.

“GEO-2 will deliver unprecedented global, persistent and taskable infrared surveillance enabling the nation and our allies to have global situational awareness for years to come,” said the Air Force in a statement – although plenty of work and four more launches remain to be completed before the system becomes fully operational.

GEO-1, the first satellite in the system, was launched back in May 2011, with lead contractor Lockheed Martin describing it as “the most technologically advanced military infrared satellite ever developed”. Eventually, the SBIRS constellation will consist of four satellites in geosynchronous orbit, and another four payloads in highly elliptical earth orbit (HEO) – two of which are already in place.

GEO-1 performing “beyond spec”
"Today's successful launch of the GEO-2 satellite marks another milestone in the evolution of infrared surveillance from space," said Stephen Toner, VP of Northrop Grumman's military and civil space business division. "The team played a significant role ensuring that the sensors on GEO-1 are performing beyond specification, and we are confident that the GEO-2 sensors will exhibit similar performance." 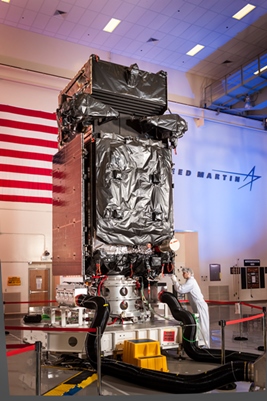 The primary objective of SBIRS is to give the US early warning of any hostile missile launches, and one key feature of the satellite constellation’s technology is its much-improved infrared sensitivity.

Another is the use of mid-infrared sensors and “see-to-the-ground” spectral bands, whereas the existing surveillance system used to look out for missile threats only works in the short-wave infrared region.

According to Air Force Space Command, the SBIRS constellation will ultimately feature sensor payloads on the HEO satellites and two IR sensors on each of the geosynchronous satellites.

“The HEO sensor is designed to detect the launch of submarine-launched ballistic missiles from the north polar region and can be tasked to perform other IR detection missions as well,” says an Air Force fact sheet.

The GEO scanning sensor provides a shorter revisit time and greater sensitivity over its full field of view than existing satellite sensors, while a staring sensor provides step-stare or dedicated stare operations over smaller geographic regions.