Launched in Japan, the imaging technique provides physicians with a better view of narrowed coronary arteries. 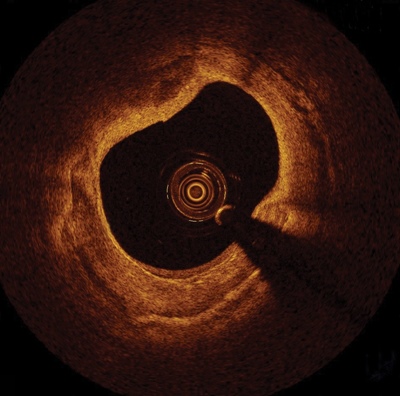 Inside blood vessels: the OCT view

US-based healthcare and medical device giant St Jude Medical has launched a new system based on optical coherence tomography (OCT) imaging that is designed to improve the treatment of coronary artery disease.

The “ILUMIEN OPTIS” system, launched in Japan, is said to help physicians make personalized decisions about the placement of the stents that are used to ensure that blood flows freely through a patient’s coronary arteries, based on the individual’s particular anatomy and disease state.

St Jude - which acquired LightLab Imaging, the company co-founded by OCT pioneer Jim Fujimoto, back in 2010 for $90 million - says that the new system offers the only combined fractional flow reserve (FFR) and intravascular OCT imaging platform.

When used together, FFR and OCT offer physicians a physiological and anatomical view of the coronary blood vessels to help diagnose and treat coronary artery disease.

“The ILUMIEN OPTIS system enables a higher image resolution, and thus makes it possible for us to analyze difficult anatomical structures, allowing me to focus on diagnostic and treatment strategies,” explained Dr. Takashi Akasaka of Wakayama Medical University, in a statement from St Jude. “Also, this new analytical tool will be helpful for sizing and placing the stent. This technology has become increasingly important to help efficiently diagnose and treat patients.”

Combination system
In the new system, the FFR part of the tool provides detailed analyses of blood-flow blockages in the coronary blood vessels to help determine which specific blockages are causing the patient’s blood flow to be ineffective. It uses a pressure guidewire that is directed through the coronary arteries and across narrowed vessels, taking measurements as the guidewire is pulled back through the narrowed part of the artery.

The OCT technology in the new system uses St Jude’s “Dragonfly JP Imaging Catheter” to image with near-infrared light, which measures important blood vessel characteristics that would otherwise be invisible or difficult to assess.

With higher resolution than earlier tools, and real-time, three-dimensional reconstruction, OCT is used to provide a 360-degree panoramic view of the blood vessel, making it easier for physicians to visualize the anatomy that they will subsequently treat with a stent.

St Jude says that the FFR and OCT measurements captured by the ILUMIEN OPTIS system allow physicians to more easily differentiate plaque build-up and determine if the narrowed arteries are causing ischemia, or a restriction in blood flow, ultimately assisting in stent placement.

The three-dimensional view provided by OCT has not previously been available in real time, and this enhancement should help physicians to diagnose their patients more quickly. In July 2011, when St. Jude’s OCT system received CE mark approval for use in Europe, Fujimoto said that the emergence of high-speed CCD imagers had been a critical development in providing the real-time views.

Clinical trials
The more typical analysis of diseased coronary arteries is performed using an angiogram, where a dye is injected via a catheter into the patient’s arteries, which are then imaged using X-rays.

But that standard procedure does carry some inherent risk. According to St Jude, the advantages of FFR have been demonstrated in a number of clinical trials, for example that instances of “major adverse cardiovascular events” were reduced in patients whose treatment was guided by FFR rather than by standard angiography alone.

A subsequent study revealed that the number of patients returning to hospital for urgent care was 86% lower for patients with stable coronary artery disease whose stenting procedure was guided by FFR than for those who received medical therapy alone.

The potential market for OCT to be used in cardiovascular disease diagnosis is enormous. In Japan alone, it is estimated that some 245,000 stent procedures (known as coronary angioplasties) are performed each year to treat cardiovascular disease. Of those, nearly 80% are believed to use an imaging technique.