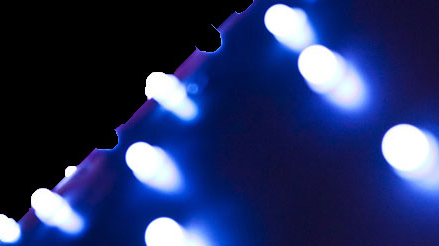 The €11.8million pan-European NEWLED project is aiming to develop a new generation of 50-60% energy efficient white light-emitting LED lights, which would be more than twice as efficient as existing LED-based bulbs.

The project leaders based at the University of Dundee, Scotland, say that the higher efficiency white-light LEDs, if widely implemented, could have a significant effect on reducing global energy consumption and CO2 emissions.

The European-wide research project is focused on achieving high efficiency and high brightness monolithic and hybrid all-semiconductor white light-emitting gallium nitride-based diodes (GaN). The NEWLED project brings together a wide range of academic and industrial partners and is funded through the European Union's FP7 programme (see partners below).

Professor Edik Rafailov, NEWLED project leader, who is based in the School of Engineering, Physics & Mathematics at Dundee, commented, "Common light bulbs have a pretty low efficiency rating and even the best current white LEDs in use only have an overall efficiency of around 25%."

"What we are aiming to develop is a significantly more efficient white LED, which would be around 50-60% efficient. If we can achieve that and they subsequently become widely adopted, then the effects on overall energy consumption would be enormous. Such LEDs would also enable lighting over which much more control could be exercised in brightness and tone."

Power losses due to phosphor conversion and the problem of different ageing rates of the GaN LED pump will be eliminated by the development of phosphor free structures with increased brightness (power emitted per surface per angle). NEWLED will enhance the efficiency of yellow InGaAlP/AlGaAs LEDs with a design called bandgap-engineered superlattices.

Newled – new approach
Novel light extraction approaches will target advanced directionality and color adjustment. Values of 50-60% overall efficiency with a conversion of greater than 200lm/W in the exploited warm-white LEDs are targeted as well as the realization of a color rendering index greater than 95.

Advanced packaging will enable effective heat dissipation and light management and the devices are expected to have applications in automotive, industrial lighting and displays. Widespread use would cut global energy electricity* consumption by about 10% and reduce CO2 emissions by 3bn tonnes.

The effort to produce highly efficient white LEDs will see the project examine every stage of the LED fabrication process, from developing new knowledge on the control of semiconductor properties on a near-atomistic level to light mixing and heat management. By examining the entire process, NEWLED aims to ensure that the new LEDs will be well adjusted to avoid compromising the achievements of the overall process and to ensure significant system and operating cost reduction.

Project and partners
The NEWLEDS project commenced in November 2012 and will runs through until almost the end of 2016. Project costs are budgeted to be €11.8m, with funding of €8.4m already committed from the FP7 Seventh Framework Programme.

* this article was edited on March 26.