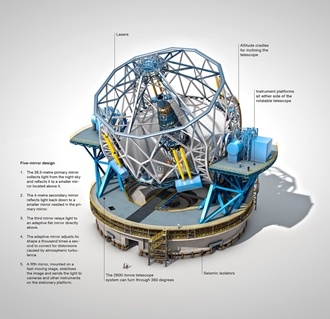 The UK government has agreed to invest £88 million in the construction of the European Southern Observatory’s (ESO’s) “Extremely Large Telescope” (ELT) project.

The commitment confirms the provisional “ad referendum” vote in favor of supporting the project, made in June last year. As a major partner in ESO and its funding, the UK’s financial commitment was crucial to the E-ELT project, although construction at the site in Chile will not begin until Brazil has confirmed its support.

Announcing the UK package, which includes £35 million to be awarded by the UK’s Science and Technologies Facilities Council (STFC) for instrument production at UK research institutions and industry, Minister for Universities and Science David Willetts said:

“This significant investment reaffirms the government’s commitment to cutting-edge science. It will ensure the UK plays a leading role in a groundbreaking international project and our world-class research base has access to the latest equipment.

“Not only will this new telescope considerably increase knowledge of the universe, its construction will drive growth and innovation for UK industry. This is why space is one of our eight great technologies.

“To top it off, the advances in technology that will result from this hugely challenging project will be a real asset to the UK and have knock-on effects for other sectors and areas of research.”

Those advances relate largely to optical technologies, for example the prototype E-ELT primary mirror segments that are being developed at the OpTIC Glyndwr industrial park in North Wales. Ultimately, the contract for producing the 798 hexagonal 1.4 meter segments is expected to be worth some €100 million.

Spin-off benefits
UK teams have also been involved in the development of adaptive optics for the 2.6 meter diameter “M4” mirror in the E-ELT, a technology that is likely to have spin-off benefits in applications like ophthalmology and industrial lasers in the long term, aside from the primary goals of searching the night sky for Earth-like exoplanets and the earliest galaxies.

“UK teams of scientists and engineers have built strong positions over the last few years to enable them to make major contributions to the instruments, telescope engineering and optical systems. We expect to lead one of the ‘first light’ instruments and look forward to UK industry making competitive bids for contracts to supply optical devices, detectors, software and engineering services for this challenging project.”

Taking part in the instrument programme will be university teams at Durham, Oxford and Cambridge, who will collaborate closely with the UK ATC in Edinburgh and Rutherford Appleton Laboratory Space (RAL Space), alongside international partners.

At 39.3 meters in diameter, the primary mirror of the E-ELT will make it the largest such optical instrument on Earth, capable of collecting 15 times more light than any existing telescope and – thanks to adaptive optics and six laser guide stars - producing images that are expected to be 16 times sharper than the Hubble space telescope.

According to the STFC, UK industry has already secured E-ELT contracts worth £9 million, with that figure predicted to approach £100 million as construction nears completion, expected in 2023.

Managed by STFC, the UK’s funding package for E-ELT will be provided from the science and research programs budget of the Department for Business, Innovation and Skills (BIS) over the course of ten years from 2013 onwards. The cash is in addition to the UK’s £18 million annual subscription to ESO.