Set of six ‘Key Enabling Technologies’ – which includes photonics – should be a priority investment area, says the bank. 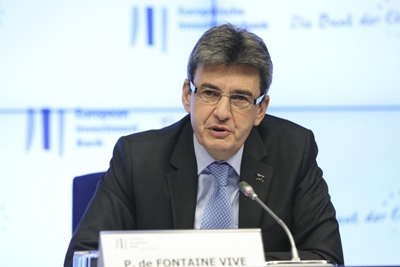 by Mike Hatcher
The European Investment Bank (EIB) has signed a memorandum of understanding with the European Commission (EC) that is expected to improve access to finance for key enabling technologies.

The MoU, signed in Brussels at the inaugural meeting of the EC’s new “high-level group” on key enabling technologies (KETs), should result in better access to EIB funding for photonics-related research and also for SMEs.

Photonics, along with nanotechnology, micro/nanoelectronics, industrial biotechnology, advanced materials and advanced manufacturing, had previously been identified by the EC as priority areas of so-called “cross-cutting” innovation of critical importance for a wide range of industrial applications.

They are described as being “of exceptional importance” for shaping the future innovation and competitiveness of the European Union (EU), at a time when science and technology funding in many of the EU’s member states is becoming more scarce.

The job of the new high-level group for KETs is to assist the EC with its implementation of the EU’s strategy to boost industrial production of KET-based products in the continent.

Triple-A rated
Now among the members of that group is Philippe de Fontaine Vive, the EIB’s vice president with responsibility for funding of innovation. According to an EC statement, he underlined that the MoU sent out a strong signal that the KETs “should be a priority investment area in Europe”.

The aim will be to increase the industrial deployment of those KETs, using the EIB’s financial mechanisms. Unlike nearly all of the members of the EU, the not-for-profit EIB still has a “triple-A” rating with all three credit ratings agencies and is therefore able to borrow money on the global financial markets at extremely favorable interest rates and pass them on to selected projects.

Last year also saw the European member states commit to an additional €10 billion in funding to the bank, contributing to what EIB president Werner Hoyer described as “an excellent year” for the institution at its annual press conference in Brussels on February 28.

He said that the EIB would now be able to act “counter-cyclically” in a bid to boost economic growth in Europe, and with the additional funds to boot. He believes that Europe is suffering from substantial under-investment in key areas, and highlighted a critical need to invest in technologies.

“Up until now, the technological edge is still the most important asset of the European Union,” Hoyer said. “But if we do not further invest and do more in technology, we will lose that competitive edge.

“The time has come to address this issue.”

And it appears that plenty of funding will be made available: "We are now prepared to deliver on boosting our lending activities by 40% per year from 2013-2015 and thus making an extraordinary effort in these exceptional times for Europe," said Hoyer.

The additional EIB lending is expected to initiate projects worth up to €180 billion including private and public investments, focusing on innovation and SME access to finance, as well as resource efficiency and strategic infrastructure.

EPIC president joins KET group
The EIB invests in a range of projects, many of them infrastructure efforts such as wind farms, power stations or major road-building. In the technological field, the Large Hadron Collider at CERN has been a key beneficiary in the past, while around a quarter of its loan value typically goes towards “climate action” projects.

Among the representatives in the new KET high-level group is Drew Nelson, CEO of the UK-headquartered epiwafer foundry company IQE and also president of the European Photonics Industry Consortium (EPIC).

In an EPIC statement, Nelson said: “I will be a vigorous supporter and promoter of KETs at regional, national, and European level and take every opportunity to help design and implement policies to help the competitiveness of Europe through the rapid deployment of KETs.”

While the EC still regards Europe as a global leader in KETs such as photonics, with its share of patent applications at more than 30% in the various fields, it is very concerned about maintaining that position and converting it into economic growth.

“Despite this [leadership position], the EU is not translating its dominant R&D base into the production of goods and services needed to stimulate growth and jobs,” read the EC statement on the signed MoU. “This is why the Commission called in June 2012 for a European effort to boost KETs.

“The importance of KETs in delivering sustainable growth, creating high-value jobs and solving societal challenges has also been underlined in the reinforced industrial policy communication of October 2012.”

Kroes: an “Airbus of chips”
Speaking at the meeting of the new high-level group, Neelie Kroes - the EC’s vice president for the Digital Agenda and a strong advocate of the proposed public-private partnership (PPP) in photonics under Horizon 2020 funding – said:

“We need industry to commit. We have already done so from the public sector. Commit, and show us that you will use European funds to create investment and jobs in Europe, including for high-tech manufacturing.”

With the Photonics21 industry group having committed to such a plan previously, Kroes added: “For photonics we are setting up a public-private partnership for research and innovation under Horizon 2020.”

But of the new EIB agreement, she warned: “Whatever EU resources we have, they still won't be enough to meet all your investment needs. It needs other, complementary financing, especially when closer to market. The EC’s new MoU with the European Investment Bank is a welcome step; but we also need any new suggestions you can give us: how can we develop further sources of private financing?”

Kroes added that the €700 million already committed to pilot-line microelectronics projects last year would be exceeded by similar efforts in 2013, and the plan is to continue with that under Horizon 2020.

She also highlighted that more attention to the needs of SMEs would be required, for example by giving them access to larger manufacturing capabilities and research facilities than they are able to use independently.

Kroes also said she would soon launch an ambitious new strategy for microelectronics that promised to “put Europe back in the game and make it punch at its real weight”, and that by exploiting the combination of resources available and bridging the gap between research and industrial market, Europe might create “an Airbus of chips”.