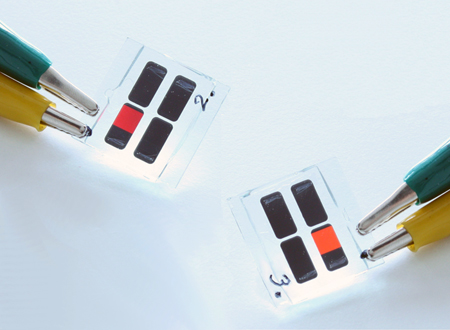 Silicon nanocrystals typically measure just a few nanometers across but they offer a high luminous potential. Scientists from KIT (Karlsruhe Institute of Technology, Germany) and the University of Toronto, Canada, have succeeded in using these crystals to manufacture silicon-based light-emitting diodes, also known as SiLEDs.

The scientists say that the SiLEDs are free of heavy metals and can emit light in a range of wavelengths. The team, which includes chemists, materials researchers, nanoscientists, and opto-electronic experts, has published its development in the “Nano Letters” journal, reference DOI: 10.1021/nl3038689.

Although silicon dominates as a semiconductor in microelectronics and photovoltaics applications, it has long been considered an unsuitable material for LEDs. However, this is not true for particles of “nanoscopic dimensions”: these tiny silicon nanocrystals have been shown to produce light.

The nanocrystals consist of a few hundred to thousand atoms and are showing considerable potential as highly efficient light emitters, according to the team of Professors Uli Lemmer and Annie Powell from KIT and Professor Geoffrey Ozin from Toronto.

In a joint project, the scientists have now succeeded in manufacturing highly efficient SiLEDs, which transmit in the red visible spectral range and in the near infrared. Considering the efficiency of silicon diodes emitting red light, the researchers from Karlsruhe say that they are “already leading the world”.

“Controlled manufacture of diodes emitting multicolor light, however, is an absolutely novelty,” said Florian Maier-Flaig, scientist of the Light Technology Institute (LTI) of KIT and doctoral student of the Karlsruhe School of Optics and Photonics (KSOP). The KIT scientists specifically adjust the color of the light emitted by the diodes by separating nanoparticles depending on their size.

“Our light-emitting diodes have a surprising long-term stability that has not been achieved before,” adds Maier-Flaig. The increased service life of the components in operation is due to the use of nanoparticles of one size only. This enhances the stability of the sensitive thin-film components. Short circuits due to oversized particles are prevented.

The development made by the researchers from Karlsruhe and Toronto is also characterized by an impressing homogeneity of the luminous areas. The KIT researchers are among the few teams in the world that know how to manufacture such devices.

“With the liquid-processed silicon LEDs that may potentially be produced on large areas as well as at low costs, the nanoparticle community enters new territory, the associated potentials of which can hardly be estimated today. But presumably, textbooks about semiconductor components have to be rewritten,” says Geoffrey Ozin, who is presently working as a KIT distinguished research fellow at KIT’s Center for Functional Nanostructures.

The SiLEDs also have the advantage that they do not contain any heavy metals. In contrast to cadmium selenide, cadmium sulfide or lead sulfide used by other groups of researchers, the silicon used by this group for the light-emitting nanoparticles is not toxic. Moreover, silicon is available at a relatively low cost and is highly abundant on earth. Due to their many advantages, the SiLEDs will be developed further in cooperation with other partners.