Sales of fiber lasers grew sharply once again, but hard-to-please analysts had been expecting more. 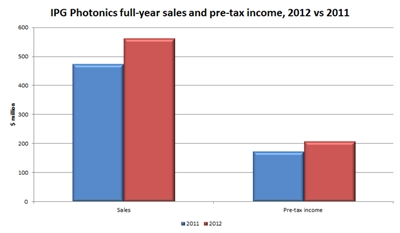 Fiber laser specialist IPG Photonics rounded off 2012 by posting a year-on-year sales increase of nearly 20%, but that was not enough to stop the company’s stock slipping in value sharply when markets opened on February 15.

The Oxford, Massachusetts, company, widely reckoned to have cornered around 80% of the fast-growing market for fiber lasers through a combination of innovation and vertical integration, reported annual sales of $562.5 million, up from $474.5 million in 2011.

IPG’s grip on the sector translated to a similarly sharp increase on the bottom line, with pre-tax profit for the full year jumping 19% to $209.2 million.

"IPG ended a solid year of financial and operational performance with strong results for the fourth quarter," said CEO and founder Valentin Gapontsev, reporting that revenues for the closing quarter of 2012 increased 17% over the prior year, driven by demand for high-power lasers used in materials processing applications.

"Materials processing sales, which make up the majority of our business, grew 14% for the fourth quarter," added Gapontsev. "High-power laser sales increased 10% from the prior year, driven by cutting and welding applications, primarily used by automotive, heavy industry and general manufacturing."

Shares slip back
Despite expressing his excitement about prospects in 2013, following the $68 million invested by the company in manufacturing and technology infrastructure throughout last year, the market reacted negatively to either the Q4 result or Gapontsev’s prediction that revenues would be somewhere around $150 million in the opening quarter of 2013.

“We are making progress on increasing sales to current major OEMs and new applications. We believe that fiber laser technology continues to make market share gains over legacy laser technologies and non-laser technologies,” said the CEO as the company’s stock lost around 10% of its value in early trading on the Nasdaq exchange.

That slip possibly reflected sales and earnings coming in slightly lower than had been expected by Wall Street, although the company maintained its typically bullish outlook during a series of talks by senior management at last week’s SPIE Photonics West show, where the company also launched its new generation of kilowatt-scale lasers featuring a raft of new innovations including a marked efficiency improvement.

At the event, CFO Tim Mammen told a packed-out venue that he expected the market for fiber laser sources, estimated by Strategies Unlimited analysts to have been worth around $570 million in 2012, to grow at a compound annual rate in the region of 20% over the coming years.

That growth would reflect not just the replacement of more traditional tools in cutting and welding applications, but the emergence of new applications that even include drilling for oil.

Drilling and paint stripping
In a talk analyzing the past, present and future markets for fiber lasers, Mammen highlighted welding of automotive transmission parts as a key application that will drive market growth in the near term.

Looking further out, possibilities are emerging in paint stripping - an IPG laser is being used by the US Air Force to ablate paint from an airplane – and the oil and gas industry.

As well as welding of pipelines, lasers are being evaluated for their ability to help drill for oil. Used in conjunction with a traditional drill bit, the ultra-high-power sources are thought to be able to soften rock so that the bit can drill more quickly, and suffer less wear and tear.

Given the colossal sums spent by the oil industry to enhance its methods, Mammen described the drilling application as a “potential game changer” that could be ready for primetime in two or three years.

Fine processing offers up another opportunity, with Mammen estimating that fiber lasers currently have a penetration of only 1% in a market worth $845 million. IPG is aiming to make an impact in that space with a new ultraviolet laser that Mammen said would be introduced “very shortly”, while rivals Coherent and Newport Spectra-Physics each launched new short-wavelength fiber lasers (Spectra-Physics’ is actually a hybrid fiber/solid-state source) at Photonics West. 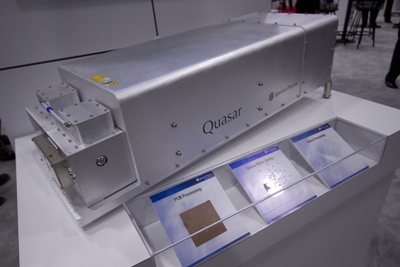 Those sources are expected to find commercial use in the microelectronics sector, a key market that analysts expect to deliver one of the sharpest increases in demand for lasers this year. Mark Douglass from Longbow Research suggests that microelectronics may stimulate “at least double-digit” growth in 2013, and perhaps more than 20%.

In a research note following Photonics West, Douglass noted the proliferation of both short-wavelength and ultrafast sources, remarking that they are well-suited to myriad applications in microelectronics throughout the manufacturing supply chain.

“There’s wafer or backplane annealing, scribing, drilling, and cutting, [and] of particular interest is display glass cutting,” wrote the analyst.