The New Mexico company lands a five-year award from the US Air Force to advance multi-junction devices. 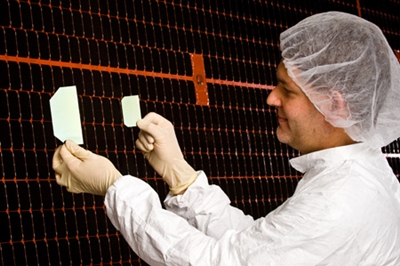 Emcore, the Albuquerque-based manufacturer of fiber-optic components and multi-junction photovoltaic devices, is being awarded a $7.4 million “cost-plus-fixed-fee contract” from the US Air Force.

Set to run until April 2018, the Advanced Multi-Junction Space Cell Producibility Program will see Emcore develop a lighter and potentially much cheaper version of the technology, which is already used widely in satellites, at its headquarters. The contracting activity is with the Air Force Research Laboratory (AFRL), via Wright-Patterson Air Force Base in Ohio.

The cells will feature the so-called “inverted metamorphic multijunction (IMM)” design pioneered at the US National Renewable Energy Laboratory (NREL), in which the cell junctions are grown in reverse order to normal and the substrate is removed following epitaxial growth – meaning that the devices can be made much lighter and more flexible than standard multijunction cells.

The relatively expensive substrate material can then be recycled to reduce the overall cell production cost in volume production. Boeing's Spectrolab subsidiary has also worked on the IMM technology in the past.

In the original broad agency announcement (BAA) the AFRL had suggested that two awards would be made under the program, which had a total estimated funding of some $16.73 million initially.

Solar traction
In its latest financial report, Emcore, which has been battling against the boom-and-bust cycles of the optical communications sector and was hit particularly badly by the Thailand flood disaster of late 2011, said that the order backlog for its photovoltaics reporting segment totaled $35.3 million as of December 31.

The space satellite industry represents a more predictable and long-term line of business for the company than either terrestrial photovoltaics or fiber-optics, although that latest backlog figure did represent a decrease of 18% from the $43.3 million total reported three months earlier.

Last August, Emcore decided to consolidate its terrestrial CPV system engineering and development efforts, for both ground-mount and rooftop applications, into Suncore. Employees working on terrestrial CPV were transferred to Suncore when the agreement closed in September.

Suncore is now set to fund all ongoing research and development, marketing, sales, and business development functions related to terrestrial CPV systems – although Emcore will continue to own all of its intellectual property related to solar cell technology, and maintain investment to advance CPV cell performance.

According to the company’s files with the US Securities & Exchange Commission (SEC), those assets were sold for $2.8 million, collected during the quarter that ended December 31, 2012. At $2.6 million, revenues from Suncore in the latest quarter were up sharply from $0.2 million on a year-over-year basis.