Researchers at Vienna University of Technology say that a new class of materials can create a superior solar cell. 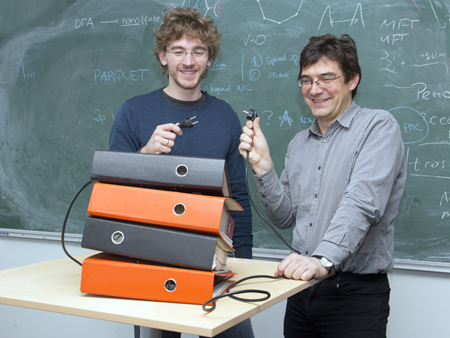 Single atomic layers are combined to create novel materials with completely new properties. Layered oxide heterostructures are a new class of materials, which has attracted a great deal of attention among materials scientists in the last few years.

A research team at the Vienna University of Technology, together with colleagues from the USA and Germany, has now shown that these heterostructures can be used to create a new kind of extremely efficient ultra-thin solar cells.

“Single atomic layers of different oxides are stacked, creating a material with electronic properties which are vastly different from the properties the individual oxides have on their own,” says Professor Karsten Held from the Institute for Solid State Physics, Vienna University of Technology. In order to design new materials with exactly the right physical properties, the structures were studied in large-scale computer simulations.

As a result of the research, the scientists at TU Vienna discovered that the oxide heterostructures hold great potential for building solar cells.   The basic idea behind solar cells is the photoelectric effect. Its simplest version was already explained by Albert Einstein in 1905: when a photon is absorbed, it can cause an electron to leave its place and electric current starts to flow. When an electron is removed, a positively charged region stays behind – a so called “hole”. Both the negatively charged electrons as well as the holes contribute to the electrical current.

“If these electrons and holes in the solar cell recombine instead of being transported away, nothing happens and the energy cannot be used,” says Elias Assmann, who carried out a major part of the computer simulations at TU Vienna. “The crucial advantage of the new material is that on a microscopic scale, there is an electric field inside the material, which separates electrons and holes.”

This approach increases the efficiency of the solar cell.     The oxides used to create the material are actually isolators. However, if two appropriate types of isolators are stacked, an astonishing effect can be observed: the surfaces of the material become metallic and conduct electrical current.

“For us, this is very important. This effect allows us to conveniently extract the charge carriers and create an electrical circuit,” adds Held. Conventional solar cells made of silicon require metal wires on their surface to collect the charge carriers – but these wires block part of the light from entering the solar cell.  Not all photons are converted into electrical current with the same efficiency. For different colors of light, different materials work best.

“The oxide heterostructures can be tuned by choosing exactly the right chemical elements,” says Professor Blaha, also of TU Vienna. In the computer simulations, oxides containing Lanthanum and Vanadium were studied, because that way the materials operate especially well with the natural light of the sun.

“It is even possible to combine different kinds of materials, so that different colors of light can be absorbed in different layers of the solar cell at maximum efficiency,” says Assmann.   The team from TU Vienna was assisted by Satoshi Okamoto (Oak Ridge National Laboratory, Tennessee, USA) and Professor Giorgio Sangiovanni, a former employee of TU Vienna, who is now working at Würzburg University, Germany.

In Würzburg, the new solar cells will now be build and tested. “The production of these solar cells made of oxide layers is more complicated than making standard silicon solar cells. But wherever extremely high efficiency or minimum thickness is required, the new structures should be able to replace silicon cells,” says Held.