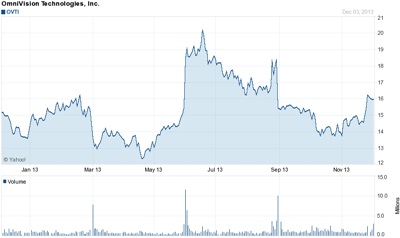 California-based OmniVision Technologies (OVT) has reported sales of $397.2 million in its latest quarter, up slightly from the figure of $390.1 million posted a year ago.

Working in a market that is subject to sharp seasonal swings in demand – the latest quarter inevitably resulted in a surge of demand as consumer electronics manufacturers geared up for the holiday season – the company said that it had grown sales despite some difficult market forces:

“In the second quarter of fiscal 2014, [we] grew revenues in the midst of a slowing smartphone market and intensifying competition,” said CEO Shaw Hong. “We are happy to report sequential improvements in our gross margin, cash, as well as inventory turns.”

The quarter that ended on October 31 saw OVT ship some 239 million image sensors overall, benefiting from the launch of new smart phone and tablet products in North America. “On the other hand, a slow demand in China was accompanied by intensive competition,” reported Hong.

The CEO is also excited about OVT’s recent launch of new “PureCel” sensors, which he says represent the culmination of years of research and development resulting in “dramatically enhanced” image and video quality in both bright and low-light conditions, combined with lower power consumption.

Last month, the company released a PureCel-branded 13 megapixel sensor designed for high-end mobile devices, in an attempt to tap into a market segment that analysts have predicted will be the fastest-growing for primary camera resolution next year.

The new product is said to enable makers of mobile devices to upgrade the cameras in their smart phone and tablet offerings from 8 megapixels to 13 megapixels with no impact on overall cost or battery life.

Diversification
“While end-market demand remains volatile, our scale, technology and product portfolio should position us well to weather such volatility over the coming years,” added Hong, hinting at the diversification strategy being pursued by the company. One area of diversification from mobile devices where OVT is now seeing some significant traction is the automotive sector.

Automotive applications for driver assistance and “infotainment” currently represent less than 10 percent of OVT’s sales, but the company is hopeful that this will change along with the growth of in-car electronics and the potential emergence of self-driving cars.

He added that OVT was also awarded a significant design win at a top-tier Japanese car maker in the latest quarter. “We believe that we are poised to extend our design wins success in Europe and North America to Japan, covering the vast majority of global automotive OEMs,” he told an investor conference call.

The combination of applications in automotive and security, which is also a growth sector for OVT, is heading towards 10 per cent of OVT revenues, added Cisneros. As that proportion grows it is set to add stability and profitability to the company’s finances – and should reduce the cyclical impact of the consumer electronics space.

For the current quarter, which ends in January, OVT predicted revenues of between $310 million and $340 million in the seasonally weaker period. Investors reacted negatively to that outlook, with OVT’s stock price falling by nearly 15 per cent in pre-market trading.