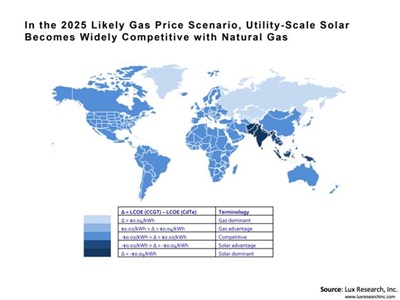 Solar-generated electricity will become just as cheap as that produced by natural gas in most parts of the world by 2025, according to a new analyst report.

Lux Research, which specializes in predicting the impact of emerging and “clean” technologies, says that ten major global regions will benefit from competitive, subsidy-free solar by the middle of the next decade – with the abundance of natural gas proving to be a help, rather than a hindrance, to solar adoption.

“Far from being bulldozed by cheap natural gas, unsubsidized utility-scale solar electricity will become cost-competitive with gas by 2025,” says the Boston-based think-tank.

Lux research associate Ed Cahill writes in the report Cheap Natural Gas: Fracturing Dreams of a Solar Future that the levelized cost of energy (LCOE) from unsubsidized utility-scale solar will close the cost gap with combined cycle gas turbines (CCGT) to within $0.02 per kWh worldwide in 2025.

The competitiveness of solar will be led by a 39 per cent fall in utility-scale system costs by 2030 and assisted by barriers to shale gas production such as anti-fracking policies in Europe and the expected high capital cost of developing the technique in South America.

And despite the recent widespread adoption of fracking in North America and potentially in other regions, Cahill believes that this will ultimately serve as a route to solar adoption:

“On the macroeconomic level, a ‘golden age of gas’ can be a bridge to a renewable future as gas will replace coal until solar becomes cost competitive without subsidies,” he said. “On the microeconomic level, solar integrated with natural gas can lower costs and provide stable output.”