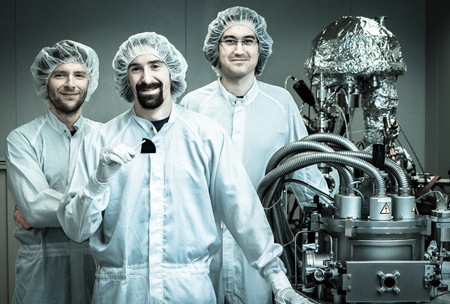 Whether it is diagnostic imaging, analysis of unknown substances or ultrafast communication – terahertz radiation sources are becoming more and more important.

Terahertz waves can penetrate many materials that are opaque to visible light and they can be used for detecting a variety of molecules. Terahertz radiation can be produced using tiny quantum cascade lasers, only a few millimeters wide, which consist of purpose-built semiconductor layers on a nanometer scale.

Now researchers at the Vienna University of Technology (TU Vienna) have developed a special merging technique to join together two symmetrical laser structures, resulting in a quadrupled intensity of laser light. The results of the work has just been published in the journal Applied Physics Letters.

For the electrons in each layer of the quantum cascade laser, only certain discrete energy levels are allowed. If the right electrical current is applied, the electrons jump from layer to layer, in each step emitting energy in the form of light. By this means, the exotic terahertz radiation with wavelengths in the sub-millimeter regime can be produced with high efficiency.

Many molecules absorb light of this spectral region in a characteristic way – so they may be considered to have an “optical fingerprint”. Because of this, terahertz radiation can be used as a chemical detector. It also plays an important role for medical imaging: it is non-ionizing radiation, its energy is considerably lower than that of X-rays, so it is less dangerous. Furthermore, its wavelength is shorter than that of microwave radiation, which means that it can be used to create higher resolution images.

One possible way to increase the laser power is to use more semiconductor layers. More layers means that the electron changes its energy states when it passes through the structure, so the number of emitted photons increases. The production of such multi-layer structures, however, is extremely difficult.

Two lasers are connected, creating a larger and much more efficient one.

Prof. Karl Unterrainer’s team at the Institute of Photonics at TU Vienna has succeeded in merging two separate quantum cascade lasers in a bonding process.

Researcher Christoph Deutsch commented, “This only works for a very specific design of the quantum cascade structure. With standard quantum cascade lasers, this would definitely be impossible.”

Symmetrical lasers are required, through which electrons can pass in both directions. The team needed to compensate for the asymmetries that usually arise in such lasers. The higher the number of layers, the more photons are produced. In addition to that, the efficiency is increased due to improved optical properties. “This is why doubling the number of layers eventually leads to quadruple power”, explained fellow researcher Martin Brandstetter.

The previous world record for terahertz quantum cascade lasers of almost 250 mW was held by the Massachusetts Institute of Technology (MIT). The laser of TU Vienna now produces one watt of radiation. This is not only another record for TU Vienna, breaking the one-watt barrier is considered to be an important step for the application of terahertz lasers in a variety of technological fields.