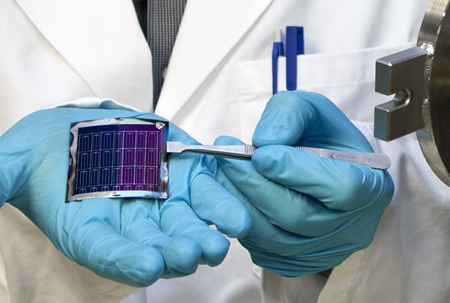 This has enabled them to achieve an efficiency of 20.4% for the conversion of sunlight into electrical energy. Furthermore, as the solar cells are deposited onto plastic foils, they could now be produced on an industrial scale using cost-effective roll-to-roll manufacturing.

The team led by EMPA researcher Ayodhya Tiwari has refined the manufacturing technique for CIGS solar cells, in which tiny quantities of sodium and potassium are incorporated into the CIGS layer. This special treatment alters the chemical composition of the complex sandwich structure – thereby altering its electronic properties, as confirmed by various methods including detailed electron microscope investigations. Details of the new method have just been published in the journal Nature Materials.

By this technique, the EMPA team has been able to significantly increase the energy conversion efficiency from sunlight into electricity using CIGS thin film solar cells on flexible plastic foils – to a new record level of 20.4%, representing a marked improvement over the previous record of 18.7%, which was established by the same team in May 2011.

Tiwari says that this achievement means that CIGS cells can more effectively compete with the best polycrystalline silicon cells. Until recently, the EMPA CIGS cells were the most efficient in the world; at the end of October, though, a German research team at the Zentrum für Sonnenenergie- und Wasserstoff-Forschung (ZSW) in Stuttgart recently reported CIGS cells with an efficiency of 20.8%, although they use far higher processing temperatures and rigid glass as the substrate.

He adds, “ZSW’s improved record shows that CIGS thin film technologies are currently a hot topic and that Empa is right at the cutting edge.”

"The use of flexible substrates requires distinct incorporation of the alkaline metals, and so far mainly sodium was believed to be the most favourable element, whereas other alkaline metals have resulted in significantly inferior device performance. A new sequential post-deposition treatment of the CIGS layer with sodium and potassium fluoride enables fabrication of flexible photovoltaic devices with a remarkable conversion efficiency due to modified interface properties and mitigation of optical losses in the CdS buffer layer.”