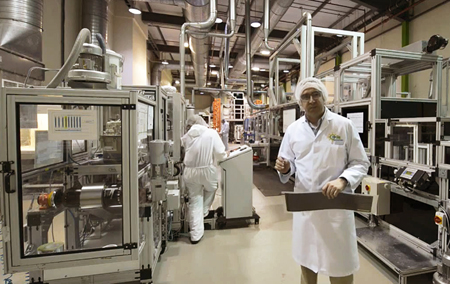 Newport, UK-based G24i Power, a solar cell manufacturer, has recommenced production of its solar cells after acquiring G24 Innovations, which re-emerged under new ownership in March 2013, after going into administration last year.

In mid November, the company, was able to re-start production of its dye-sensitised solar cell (DSSC), as well as starting research and development activities on new products including solid-state flexible cells.

G24i Power is the developer of the GCell, a thin, flexible, photovoltaic film that converts light energy into electrical energy even in low light conditions. Located at a new 89,000sq ft factory at Imperial Park in Newport, South Wales, the company will now employ 35 local workers and plans to quadruple its production capacity from 500 km to 2,000 km in the next two years.

Design engineers at G24i Power are also looking into developing the next generation GCell, which will see enhancements to its power density and configuration as well as offering "new aesthetic options.

Richard Costello, CEO of parent company G24 Power, said: “Our GCell is the closest that mankind has come to replicating nature’s photosynthesis process. We are now able to use this technology to create the next generation cell. We are delighted to be able to move into a more suitable factory, which will allow us to increase production and work more effectively on new products.

Costello added, “We even have a few famous fans. Former Vice-President of the United States, Al Gore, was presented with a unique backpack powered by one of our GCells on his recent visit to École Polytechnique Fédérale de Lausanne, Switzerland. As arguably the world’s highest profile environmental campaigners we are delighted that we can show him what our cells can do. He will now be able to use his backpack to capture energy from sunlight and ambient light to charge various electronic devices including his mobile phone.”

G24 Power’s products have been used all over the world and its innovations have included installation of energy efficient window blinds for 8,000 windows at the MGM Grand hotel in Las Vegas, and creating the world’s first light-powered iPad keyboard folio.

In a corporate video from before the spell of administration and buy-out, Costello explained G24i's technology: