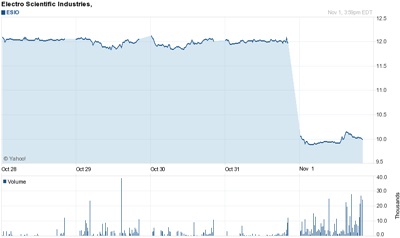 Shares in the laser microfabrication equipment vendor Electro Scientific Industries (ESI) lost nearly one-fifth of their value, despite the US company reporting quarterly sales near the upper limit of its prior expectations.

For the three months that ended September 28 – the second quarter of ESI’s fiscal year 2014 – the Portland, Oregon, firm posted a net loss of $2.8 million on sales of $59.6 million.

But while those figures represented a significant improvement on the June 2013 quarter, ESI’s stock price was hit as CEO Nick Konidaris told investors that sales would slip back significantly in the current quarter, to just over $40 million.

New glass adoption delayed
Part of the reason for the anticipated slump was, Konidaris said, a lull in demand for ESI’s laser microfabrication equipment resulting from delayed adoption of new types of toughened glass in consumer electronics applications.

With customers also continuing to absorb capacity that they purchased earlier in the year, ESI’s orders in the latest quarter fell to $46.2 million, down from $58.3 million sequentially.

In August, Konidaris had reported the first customer acceptance of ESI’s “DiamondBlaze” system – laser equipment designed to cut the new generation of “ConCore” toughened glass developed by Corning that is expected to find widespread use in touch-screen applications.

And in an investor conference call to discuss the latest financial results, the CEO said that ESI expects to ship the first ‘Gen6’ tool to a major touch-panel manufacturer before the end of the calendar year.

That would represent the first such glass production tool in the industry, and although the adoption of the new glass by OEMs has been slower than anticipated so far, Konidaris added: “We’re confident that as these next-generation glasses are adopted in the industry over the next several quarters it will drive a significant new revenue opportunity for ESI during the next fiscal year.”

Asked about the delayed adoption of the glass in consumer electronics, the CEO told investors that initial applications of the toughened glass had been earmarked for laptop PCs whose market share has been squeezed by the popularity of tablet devices.

Following the results announcement, ESI’s stock fell by 18 per cent. At the market close on November 1 it was trading at $10 – essentially flat with the start of 2013.

• During the latest quarter, ESI also upped its investment in Massachusetts-based OmniGuide with a $5 million equity purchase. OmniGuide sells a fiber-delivered CO2 laser system that is widely used in microsurgery.