Startup Challenge applications for the February 2014 event are due December 1. 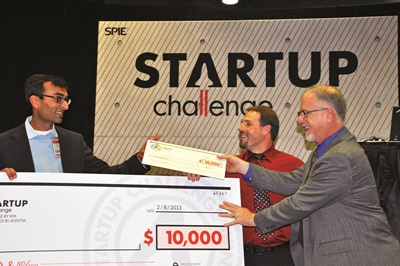 The forthcoming Photonics West conference and show will feature an increased focus on technology transfer, according to organizers SPIE.

The international society for optics and photonics, also the publisher of optics.org, has added new sessions dedicated to helping applied photonics research transfer into commercial applications – reflecting trends in development funding in Europe and the US.

For the February 2014 event in San Francisco’s Moscone Center, an expanded industry and business conference track will feature panel sessions on topics including financing of life science and healthcare ventures, an “accelerator forum” aimed at start-ups and a technology transfer showcase hosted by Sandia National Laboratories’ licensing executive David Wick.

Economic impact keynote
Those events sit alongside some familiar panel sessions, on the themes of silicon photonics and green photonics – as well as the long-running “executive perspectives” panel featuring some of the photonics industry’s biggest names.

On top of that will be the Prism Awards and Start-up Challenge events, alongside a keynote talk on the economic impact of photonics at a special cluster reception, plus workshops on US export controls, intellectual property, marketing and commercialization.

Another new development for the 2014 event will see the four established technical symposia – LASE, OPTO, MOEMS/MEMS and BiOS – augmented by a “virtual symposium” dedicated to translational research.

Chaired by Bruce Tromberg from the Beckman Laser Institute, the new symposium focuses on five distinct research topics that are seen as having a high potential for clinical application. It is the second virtual symposium to be added to the event, which also features a green photonics program chaired by Stanford University’s Steve Eglash.

SPIE says it is expecting some 1300 companies to participate in the three-day exhibition accompanying the technical symposia on February 4-6, while 235 will exhibit at the BiOS Expo that runs February 1-2.

• Applications for the 2014 SPIE Startup Challenge are being accepted through December 1. This time around the event features additional sponsorship, with the winner of the $10,000 first prize also set to walk away with $5000 worth of products from Edmund Optics.

Founding sponsor Jenoptik has now been joined by Edmund, Trumpf, Open Photonics and IP law company Knobbe Martens to support the event, which was won last year by Arun Chhabra (pictured above) and Erik Klaas from the Texas-based optical inspection systems firm 8tree.