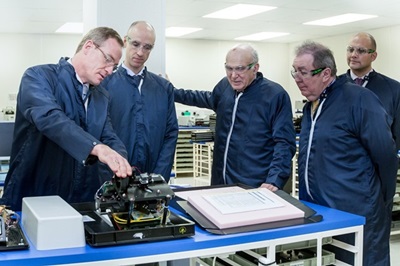 Vince Cable, the UK Secretary of State for Business, Innovation and Skills, has opened a factory extension at photonics company Gooch & Housego’s growing site in Torquay.

The visit represents just the latest in a series of trips to optics and photonics facilities in the UK by the minister, who in recent months has also visited LED maker Plessey in Plymouth, industrial laser firm Rofin-Sinar’s site in Hull, and Southampton-based Trumpf subsidiary SPI Lasers.

“Dr Cable visiting our facility and opening our new factory extension was an honor for Gooch & Housego and a reward for all the staff who have contributed to our growth, innovation and diversification.”

“Our business has gone through a transformation in the last ten years from a telecoms component manufacturer to a photonics solutions provider, and the recent launch of the systems technology group in Torquay will further enhance this growth.”

Creating the new systems group is part of Gooch & Housego’s diversification strategy, in which it is targeting the life sciences sector and sees an emerging opportunity in laser surgery and the potential to grow its existing presence in the optical coherence tomography imaging equipment supply chain.

Up the value chain
Catley said that the company was looking to both diversify the markets it supplies and move up the value chain, and that the Torquay facility had been identified as the site to host the new systems group.

“Gooch & Housego Torquay is making significant progress in supplying higher-level assemblies in the optical coherence tomography, industrial laser, aerospace and defence and telecom markets,” he told optics.org. “This has led to a greater demand for both engineering resource and production capacity and in turn for an expansion in floor space.”

In the ribbon-cutting ceremony to open the factory extension, Cable said: “Gooch & Housego Torquay is a prime example of the type of business which the government can collaborate with to deliver growth in our economy with its focus on technology, innovation and export.” 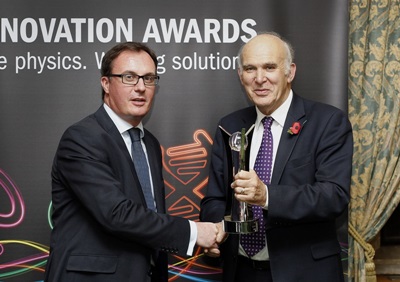 • Further extending his familiarity with the UK’s photonics industry, Cable was also on hand to present US laser firm Coherent’s Scotland subsidiary with an innovation award from the UK-headquartered Institute of Physics (IOP) for its tunable ultrafast Chameleon laser earlier this month.

The automated, one-box system is being used in a wide range of biophotonics applications, including in vivo brain imaging for neurodegenerative diseases such as Alzheimer’s and Parkinson’s, and is said to have created almost 100 jobs for the company since it was introduced to the market ten years ago.

Coherent Scotland’s general manager Chris Dorman, shown receiving the award from Vince Cable, said: “It is a great reward and vindication of our efforts to create products that not only push the boundaries of photonics science, but employ the technologies in an accessible manner, so that they may address real world applications and problems.”