Market for sapphire is booming as smart phones adopt the scratch-proof gemstone. 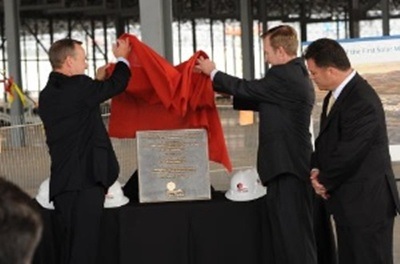 by Mike Hatcher
The factory in Mesa, Arizona, had never been intended to house the manufacture of a gemstone. Ahead of the photovoltaics industry’s 2011-2012 meltdown, First Solar had built it with the aim of producing 280 MW worth of solar panels there each year from four production lines.

Dignitaries posed for photos and the facility was even dedicated by First Solar’s then-CEO Rob Gillette part-way through its construction, but ultimately the company abandoned the site - along with Gillette - before it was even commissioned.

Mesa had promised the creation of some 600 skilled manufacturing jobs under First Solar, jobs that never arrived. But now that same site is set to employ more than 700 people, thanks to the growing use of sapphire in consumer electronics – and Apple’s promise to bring manufacturing jobs back to the US.

In a deal announced on November 4, GT Advanced Technologies (GTAT) and Apple said that they would use the Mesa facility to make sapphire under an exclusive supply agreement for the consumer electronics giant. Apple likes the material because of its optical and scratch-proof properties – ideal for covering the fingerprint sensors on its latest iPhones.

Up-front payment
GTAT, which has been suffering of late because of its exposure to the photovoltaics market and resulting low demand for its polysilicon manufacturing equipment, is to receive some $578 million from Apple in four separate installments as it sets about building sapphire capacity and ramping production of the material.

The deal is designed as an up-front payment for cash-rich Apple’s sapphire requirements from GTAT, which is planning to reimburse the amount over five years, starting in 2015. GTAT said it had already accelerated its plans to develop “next-generation” sapphire furnaces with a larger capacity than existing tools.

That development that will have a positive knock-on impact for other sapphire applications, notably solid-state lighting, by supporting the production of larger-diameter wafers on which LED chips are fabricated. 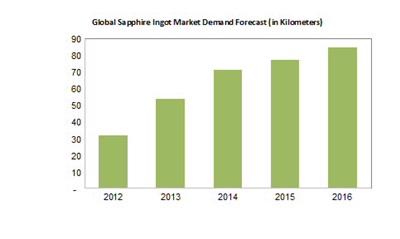 "We are very excited about this agreement with Apple as it represents a significant milestone in GT's long term diversification strategy," said Tom Gutierrez, GTAT's CEO, as he announced a deal in which Apple will provide the Mesa facility, while GTAT will own and operate the sapphire furnaces at the site.

And although the exclusive agreement will inevitably reduce his company’s profit margins as it becomes a part of Apple’s sprawling supply-chain, it will enable GTAT to scale up sapphire production massively without undue risk and position itself as a low-cost supplier.

Sapphire boom: good for LEDs and lasers
The growing attractions of sapphire for makers of smart phones was recognized by the CEO of another manufacturer – Rubicon Technology – just last week. Raja Parvez noted that Apple was expanding its use of the material from fingerprint sensors to the “home” button, and that other consumer electronics companies were following suit.

Indeed, the trend towards sapphire had already been noted by analysts at the market research company IHS. In their “sapphire ingot/substrate” report published last month, ahead of the Apple/GTAT agreement, they predicted:

“Demand for 2-inch-diameter sapphire ingots used to make substrates will amount to 84 kilometers in 2016, up 166 per cent from 32 kilometers in 2012. This year will see particularly strong growth, with demand rising 70 per cent to reach 54 kilometres.”

“Apple triggered the current boom in demand when it became the first smartphone maker to employ a sapphire lens cover in 2012,” said Richard Son, senior LED analyst at IHS. “Other smartphone brands are now following suit. Combined with strong sales from the fast-growing LED lighting market, the increase in demand should help alleviate the oversupply that has plagued the sapphire market in recent years.”