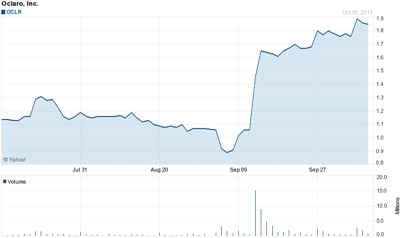 Signs of a recovery?

Diversified optics and materials firm II-VI has taken advantage of its recently extended credit facility to purchase another chunk of Oclaro’s photonics business.

By the time the second deal, a cash transaction of $88.6 million, is closed, II-VI will have spent nearly $204 million in exchange for two substantial chunks of the Oclaro business. The amplifier and micro-optics product lines were said by Oclaro to have generated some $94 million of revenue in the latest fiscal year.

The latest move sees another 145 Oclaro employees, mostly based in San Jose, Shanghai and Horseheads, New York, join II-VI, while service agreements between the two firms to ensure a smooth transition for customers are set to be agreed.

Weak balance sheet
Oclaro has been looking to sell off key assets in recent months in a bid to bolster its weak balance sheet. In May this year, the San Jose-headquartered company lost a quarter of its stock value when senior management confirmed that it needed to raise cash in order to repay loans.

As of June 29, which marked the end of the company’s fiscal year 2013, Oclaro had cash and liquid assets worth $84.8 million on its balance sheet, but financial auditors had also slapped a “going concern” notice on the loss-making firm. It is hoped that the $200 million-plus infusion of cash from II-VI will allow the company to restructure and focus on its core market of optical communications.

Those financial figures were announced after Greg Dougherty replaced Alain Couder as the firm’s CEO, while the latest II-VI transaction was accompanied by the news that Oclaro CFO Jerry Turin had resigned after eight years at the company, the past five in the CFO role.

Reinvention and restructuring
Dougherty said: "The sale of our amplifier business to II-VI is another important milestone in Oclaro's reinvention and return to financial stability. This transaction is another validation of the value of our technology, intellectual property and, most importantly, our people. The infusion of cash from our recent transactions with II-VI are critical catalysts to further our restructuring and turnaround plans."

Meanwhile II-VI’s CEO Francis Kramer sees the latest deal as a strong complement to both the Zurich fab and the company’s existing Photop business unit.

He commented: “The [fiber amplifier and micro-optics] business and its team come to us as a recognized industry leader, and are well positioned with a broad technology and product portfolio which is underpinned by over 400 patents.”

Despite that positive tone, others have expressed their skepticism about the moves being made by II-VI.

In a note issued shortly after the initial acquisition in September, Longbow Research analyst Mark Douglass wrote that the price paid by II-VI looked expensive for what, at Oclaro, had appeared to be an unprofitable business.

“While II-VI is well-run, it’s not in the turnaround business,” he remarked, adding that the notorious volatility of the optical telecommunications sector could prove difficult to manage.

He also believes that while Oclaro did have an existing customer base using its high-power diode lasers for industrial applications, the ultimate market demand from fiber laser and direct-diode companies who will buy rather than, like the powerful IPG Photonics, make their own diode lasers, will be limited - even in China.

Backing up the theory that the transactions look to have been a better deal for Oclaro than for II-VI, the stock price of the former has surged since news of the deal, while the market valuation of II-VI has slipped back noticeably.