Analysts at IHS expect market to double to $7.1 billion over next three years. 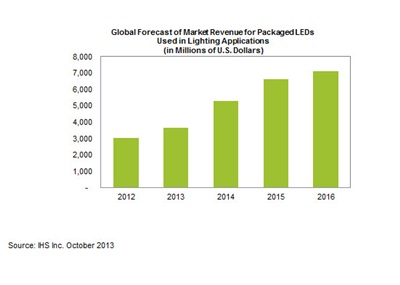 Unit sales of packaged LEDs for general lighting are set to triple between now and 2016 as solid-state technology takes a long-awaited grip over the sector.

That’s according to the latest forecast from analysts at IHS. They predict that the market for packaged LEDs used in lighting applications will grow from $3.6 billion this year to reach $7.1 billion in 2016.

At the same time, the average selling price of such devices, which comprise an LED die with a protective covering and contacts that enable it to be directly soldered to an electrical circuit, will drop from $0.41 in 2013 to $0.25 in 2016.

If correct, that would equate to unit shipments of 8.8 billion this year swelling to some 28.4 billion in three years’ time.

According to the Durham, North Carolina, company, this means that with the utility rebates now applicable, the bulbs would cost consumers less than $5 and pay for themselves within a year thanks to a massive reduction in energy consumption compared with incandescent bulbs.

He anticipates that shipments of LED lamps for lighting will increase dramatically in the coming years, rising from 520 million in 2013 to 2.4 billion units in 2016.

“The rapid expansion of the lighting market will come as a major boon to suppliers of packaged LEDs seeking the next growth opportunity following the slowdown of the backlighting business,” Shinkwin added.

With the boom in demand created by the explosion of LCD backlighting applications starting in 2009 now a distant memory, LED chip manufacturers and their suppliers have been awaiting the long-predicted “third wave” of the LED market explosion – penetration of general lighting applications.

With first mobile phones, followed by notebooks and TVs, now fully transitioned to LED technology, these applications are saturated and annual unit growth is typically limited to single-digit percentages. However, packaged LED sales revenues have in recent years been offset by continued sharp falls in average selling prices.

“With LED lamp retail prices decreasing and more consumers realizing the cost savings LED lamps can provide over long periods of time, penetration of LEDs into the lighting market is set to increase significantly,” says IHS.

However, that opportunity will inevitably generate intensified competition among the suppliers vying to capture market share, with consumers the beneficiaries as that competition drives down prices even further.

IHS is forecasting that the average selling price of a packaged LED for lighting will fall to just $0.19 in 2018.

That price erosion might slice into manufacturers’ profit margins, but it will also reduce the payback period for solid-state lighting considerably and drive further adoption – particularly in the price-sensitive residential sector.

With LED lamp penetration already well advanced in retail and hospitality applications where lighting is used extensively – for example hotel corridors – it is the residential sector where IHS believes that the largest opportunity for packaged LEDs will emerge.

As a result, the analyst report states that packaged LED revenue in the residential sector alone will reach nearly $2.7 billion in 2016, up from an estimated $850 million in 2013 and equivalent to nearly 40% of the total $7.1 billion figure.

“Manufacturers that carve out share early on in this market could garner significant returns as the market booms,” concludes IHS.