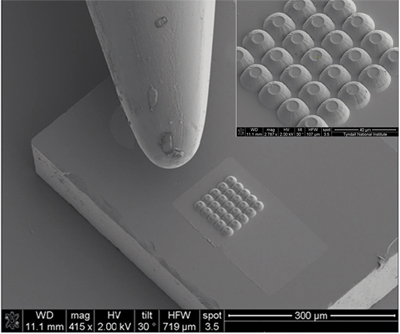 Small but powerful: A cluster of 25 MicroLEDs beside the tip of a needle.

Irish technology spin-out company InfiniLED's latest MicroLEDs (µLEDs) deliver a "record optical beam intensity", the company is claiming. The new device can produce up to 1mW of light from a single 20µm pixel at 405nm, equivalent to a light output density of more than 300 W/cm2. the company says this is the highest recorded for a commercially available LED type device.

The MicroLED combines the benefits of both laser and LED to produce its ultra-high light output. The MicroLED provides the wavelength flexibility, drive characteristics and simplicity of a LED as well as the power and collimated beam of a laser. The ability to produce such light intensity and control directly from the chip enables the light to be efficiently used in a range of applications.

InfiniLED has achieved this record performance using its patented MicroLED structure. A parabolic reflector is etched into the semiconductor material during the fabrication process. This places an optical component directly at the site of light generation and at the most effective position for control of the light produced.

Not only has the light been shown to be extracted in ultra-high intensity but also at high efficiencies. By directing all the generated light through a single surface of the semiconductor it can be efficiently collected and used in the wider system.

The MicroLED is currently being used in a range of applications included life sciences, consumer electronics and OEM equipment. The MicroLED (µLED) can be fabricated as a single pixel, large clusters of pixels or as addressable arrays where each pixel is individually switchable. The single pixels can be used to produce high intensity, collimated light over a small area or to produce useable light at ultra-low currents.

The single pixels produce light with a few nanoamps of current. To produce larger amounts of light, clusters of tightly packed MicroLEDs are available. This results in high light density and collimated emission over a wider area. MicroLEDs (µLEDs) are also available as addressable arrays of pixels. The collimation from each pixel results in high packing densities and minimal crosstalk between the devices.

Additionally, the high current densities achievable and low capacitance allows the MicroLEDs to be switched at very high speeds. Experimental work is on-going with the Tyndall National Institute and the results will be announced shortly.

Chief Commercial Officer of InfiniLED, Dr. Bill Henry commented, “These results highlight the capabilities of the MicroLED. This device can be seen as a cross-over between the power and collimation of a laser and the simplicity of an LED. The unique devices enable a range of applications. InfiniLED are proud to have achieved the landmark performance of optical density greater than 300 W/cm2. This was achieved without the need for external optics indicating the potential for further improvement of the performance.”

“The applications for the MicroLED are many and varied” adds Henry. “InfiniLED is developing light sources for use in areas such as diagnostics, printing and battery powered consumer electronics. We are particularly focussed on applications where the efficient use and control of light is of greatest importance. The first products with MicroLEDs incorporated will be on the market shortly and we look forward to new releases in the near future.”

InfiniLED will be demonstrating this technology at BiOS and Photonics West in San Francisco, between 1-7 February. Members of the InfiniLED team will be in booth 5234 at PW and booth 8929 at BiOS. They will also be giving a demonstration show on Thursday February 7 at 12.30pm in Demo Area 2 (North Hall).

InfiniLED is an innovation development project and portfolio company of ScienceWorks Ventures plc, the international IP commercialisation company. It is also an Enterprise Ireland supported spin-out company from the Tyndall National Institute and University College Cork. The MicroLED technology was invented by a team of researchers led by Brian Corbett at Tyndall National Institute.