Funding for up to three research projects is designed to bring solar cells closer to the theoretical single-junction conversion efficiency limit. 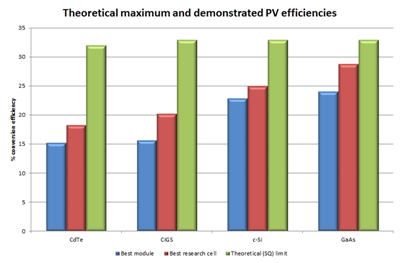 The US Department of Energy (DOE) is to back up to three research projects designed to radically improve solar cell efficiencies.

Part of the ongoing “SunShot” initiative that is aiming to deliver photovoltaic (PV) energy at a cost of only 6 cents per kWh by the end of the decade, the new “Foundational Program to Advance Cell Efficiency II (FPACE II) – Model Systems” funding opportunity will allocate $12 million in total.

For the most commonly used (non-concentrated) solar cell materials, like crystalline silicon, and thin-film CIGS and CdTe, that theoretical efficiency limit stands at either 32% or 33%. But despite decades of research and widespread commercialization over the past decade, there remains a large discrepancy between those theoretical figures and the performance of real-world cells.

For example, the record efficiency for a crystalline silicon (c-Si) cell still stands at just under 25%, a level demonstrated way back in 1998. And although this technology accounts for more than nine-tenths of the world’s deployed PV systems, the typical efficiency of the cells at the heart of those systems remains well below 20%, with most of the developmental efforts over the past few years having been focused on increasing volumes and reducing production costs.

The best-performing single-junction material thus far has been gallium arsenide (GaAs), thanks to a 28.8% device developed by the Californian start-up Alta Devices.

Fundamental research
With the planned awards, the DOE wants researchers to focus on more fundamental studies of PV materials, in order to bring the performance of solar cells much closer to the theoretical limit.

“The goal of this program is to fund research on materials growth, characterization and modelling on a sub-cell or cell level,” says the DOE. “Synergistic teams from universities, national laboratories, and/or companies will be funded to conduct integrated research to demonstrate proof-of-concept device efficiency near theoretical limits.”

Some of the topics to be investigated will include assessing the influence of extended defects such as dislocations, stacking faults and grain boundaries on junction properties, and on bulk recombination.

For example, the DOE asks, if grain boundaries truly improve charge collection in poly-CdTe and CIGS, is it possible to design an absorber to enhance charge separation and transport? And what is the optimal grain boundary width to prevent tunneling?

The DOE wants the funded teams to be collaborations between leading researchers focused on designing and building a model system device. Applicants must propose teams with at least three key members from at least two different institutions, although more partners are expected to form a comprehensive team.

It will host a webinar question-and-answer session on the funding opportunity on February 22, with award selections expected during the summer.

The maximum federal funding available from the DOE for each project will be $4.8 million over three years, with non-federal contributions expected to push total maximum project funding to $6 million.