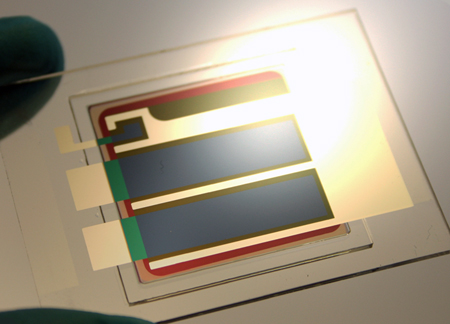 Heliatek has pushed the conversion efficiency of its organic photovoltaic cells up to 12%.

Organic solar films developer Heliatek, Dresden, Germany, reports that it has pushed the conversion efficiency of its organic photovoltaic (OPV) cells to 12%, which the company says is equivalent to at least 15% in conventional semiconductor-based cells.

The company says this performance, which was achieved in cooperation with the University of Ulm and TU Dresden, is a “world record achievement”, as measured by the accredited testing facility SGS.

The 12.0% record is based on a standard sized cell of 1.1 cm², which uses a combination of two patented absorber materials that convert light of different wavelengths. Using two different absorber materials creates a stronger absorption of photons and improves energetic utilization through a higher photovoltage.

Heliatek says that thanks to OPV’s unique behavior at high temperatures and low light conditions – when its performance either improves or remains stable – the 12% efficiency figure is equivalent to about 14% to 15% efficiency of traditional solar technologies such as crystalline silicon and thin film PV.

However, while those other technologies tend to significantly lose cell efficiency with rising temperatures and decreasing solar irradiation, organic cells increase their efficiency in these conditions leading to a much higher energy harvesting in real-world environments.

Thibaud Le Séguillon, CEO of Heliatek, commented, “We are planning to reach 15% efficiency by 2015 and gradually transfer our record efficiencies into Heliatek’s roll-to-roll production line. We manufacture solar films and not solar panels. 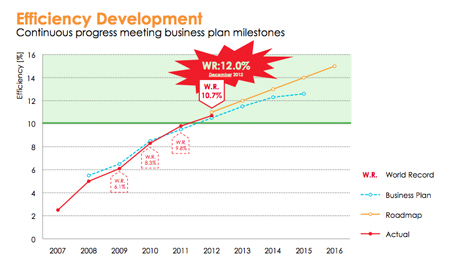 Heliatek's 12.0% achievement is based on a 1.1cm² cell, with two absorber materials.

"Our customers in the building and construction material industry, in automotive and in light structures, such as shading and street furniture, are integrating these solar films as energy harvesting components to increase the functionality of their products.”

Martin Pfeiffer, co-founder and CTO of Heliatek, added: “Achieving 12% OPV efficiency is a clear validation of Heliatek’s choice not to focus on printed polymers but to go with vacuum deposited oligomers. This technology has been used successfully for OLED displays over the last decade.

"Vacuum deposition enables extremely thin yet homogeneous layers down to a thickness of 5nm. With this well-controlled, ultra-thin film process we can deposit a large number of layers on top of each other creating tandem, or even triple junction cells, to absorb a broader spectrum of light.”

Heliatek’s latest record efficiency for OPV improves on its previous record of 10.7%, set nine months previously. To achieve the latest leap in cell efficiency, Heliatek worked with a combination of its in-house R&D know-how, as well as its strong ties with the OPV specialist universities.

One of the two key absorbers was developed and synthesized by Ulm University’s Institute of Organic Chemistry & Advanced Materials, headed by Peter Bäuerle, co-founder of Heliatek. The cooperation also involved Karl Leo (co-founder of Heliatek) and Moritz Riede of the Institut für Angewandte Photophysik of TU Dresden.

Heliatek’s OPV technology based on small molecules (oligomers) is currently being transferred to commercial production. The first production line was launched in spring 2012 and Heliatek Solar Films are already being delivered to industry partners for product development.

The commercialization of first partner applications with integrated Heliatek Solar Films as energy harvesting components is expected later in 2013. In parallel, Heliatek has launched a financing round to raise €60 million from current and new investors for a new roll-to-roll volume production line to draw on economies of scale. 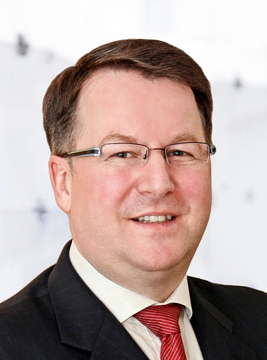 In an interview, Le Séguillon told optics.org, “Heliatek does not make solar panels as such, but what we do is produce energy-harvesting film of less than 1mm thickness. Some advantages of Heliatek’s OPV material is that it’s extremely lightweight and that it can be produced roll-to-roll onto the plastic PET. It also has good green credentials as 99% of it can be recycled.

"Our aim is to sell it effectively as an OEM product to the likes of glass manufacturers for architectural or automotive applications, to integrate into the glass parts of buildings and cars. If a builder currently wishes to integrate solar cells to a design it usually requires a special structure for support. But with our lightweight OPV film, the energy harvesting function can simply be integrated into the glass, without needing the extra support.

"The reason we are looking for €60 million further investment at the moment is to try to bring down our production costs, which are still relatively high. We can do this by modifying the economies of scale.

"Potentially we could have the lowest cost of solar harvesting due to: OPV’s economical PET substrate; the fact that we only use 1 gram of material per square meter, and we manufacture under ambient conditions under ‘grey room’ rather than clean room conditions.”

Despite these potential technical benefits, however, Heliatek’s Le Séguillon acknowledges that solar energy conversion businesses have an uphill struggle at the moment to attract significant investor interest.

“Although we have a distinct technology from the traditional silicon and thin film approaches, we are still perceived by some as just another PV company, so we are working hard, going door to door, to explain how our technology is a different approach."

On the plus side, there has already been some notable interest from customers. In 2013 there will be some pilot projects starting across Europe, based on Heliatek’s OPV. These include a deployment on City Hall in Ávila, just north of Madrid, in Spain; at a concrete factory in the Czech Republic; and at two sites in Germany. “What we are aiming to do is make solar energy harvesting ubiquitous,” Le Séguillon added.