Laser giant has high hopes for ultrafast sources in glass cutting and cataract surgery, and expects the microelectronics sector to bounce back. 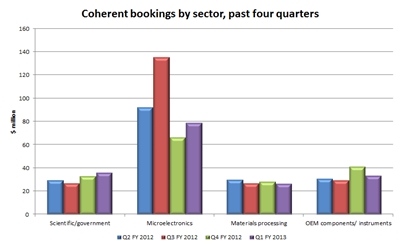 Coherent's stock rose nearly 10% in early trading, after the Californian laser company announced an increase in bookings in the first quarter of its fiscal 2013, and a generally positive outlook for the calendar year to come.

At $188.7 million, total quarterly revenues were down 3% sequentially and down 4% from the same time last year, but with net incoming rising to $14.2 million, bookings inching upwards and hopes of a second-half rebound in the important semiconductor sector, Coherent CEO John Ambroseo was in positive mood.

Highlighting the key new application areas of cataract surgery and glass processing that will be boosted by the recent acquisition of ultrafast laser specialist Lumera Laser, Ambroseo said: “Our internal estimates peg the market [for short-pulse lasers] at roughly $240 million in calendar 2012, growing to $400 million or more in 2016.”

While plastic marking and cataract applications provide the initial markets for Lumera’s picosecond lasers, glass processing – cutting in particular - is very much seen as the major long-term opportunity. “This is a market in need of a solution,” said the CEO. Coherent's three recent acquisitions should add around $30 million to Coherent sales over the coming three quarters.

Ambroseo said that the outlook in the laser refractive surgery market was good, and Coherent’s recent acquisitions should add a significant new dimension to the firm’s offerings in the wider ophthalmic sector.

“Customers are signalling increased demand,” he said. “Lumera gives us immediate entry into the fast-evolving cataract market. The combination of an Innolight product with some of Coherent’s optical expertise creates a new, low-cost platform for microkeratome work, which has the potential to displace much more complex and costly competitive offerings.”

“If we’re successful, the market size should significantly increase,” he added.

LG is expected to start shipping 55-inch versions in the second quarter, followed by Samsung shortly afterwards, and Coherent's lasers are set to be used in production of at least the first or second generation of those TVs, Ambroseo said.

With the TVs initially priced in excess of $10,000 each, the volume of shipments in 2013 will be restricted to early adopters only, but Ambroseo predicted that by late 2014 or 2015, the typical cost of OLED TVs could be reduced to between $2000 and $3000 – and beyond the tipping point for mainstream adoption.

Another high-profile technology at CES, that of flexible displays, could also lead to laser orders – although with some processing issues seemingly still to be ironed out ahead of a genuine product launch, Ambroseo declared Coherent only “cautiously optimistic” at this stage.

On the materials processing front, orders were seasonally down, but Coherent is expecting the first revenue-generating shipment of its new “HighLight 1000FL” 1 kilowatt fiber laser in the current quarter. “We have received hundreds of inquiries from different OEM customers,” Ambroseo told investors, indicating that the market had a desire for alternative suppliers in a sector dominated by IPG Photonics.

The CEO added that if the first HighLight model is well-received by the market and is ramped according to expectations, Coherent might generate more than $10 million in fiber laser revenues during 2014.

Apple “pullback”
Ambroseo also played down any potential impact of the disappointing outlook provided by Apple earlier this week. Apple uses Coherent’s lasers to help make the displays that feature in its iPhone 5, and the CEO described its component demand pullback during the latest quarter as “the most notable negative” in the microelectronics space. 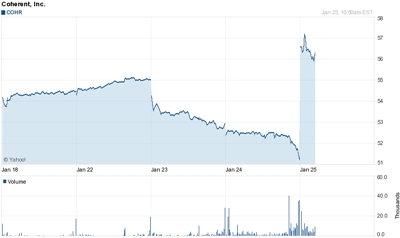 Uptick: Coherent on the rise

However, he reassured investors, it does not appear that this move will affect any existing orders - though it may impact the timing of future orders, at a time when the iPhone 6 is rumored to be in the works.

With supply-chain issues related to the Coherent’s new Korean excimer laser facility also seemingly behind the company, investors reacted positively to the financial update. Shortly after market opening on January 25, Coherent’s stock was trading at close to $56 – up 9% on the prior close and equivalent to a market capitalization of $1.35 billion.