Analyst: PV shipments to rise this year as revenues slide

IHS iSuppli is expecting 35GW of PV installations this year – an increase on 2012 but a marked slowdown in growth rate. 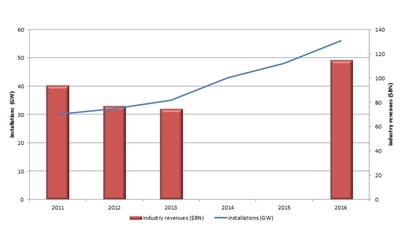 Installations up; revenues down - for now

Global installations of photovoltaic (PV) systems are set to rise again this year, but the industry will suffer a decline in overall revenues because of a slowing growth rate and decreasing system prices.

That’s the latest prediction from analysts at IHS iSuppli, who reckon that PV installations will rise to 35 GW, up from 32 GW in 2012.

But industry sales, which iSuppli calculates as the PV system price multiplied by total gigawatts installed, will shrink to an estimated $75 billion, down from $77 billion last year.

If correct, the figure would also represent a steep fall from the market’s peak revenue year in 2011, when global sales were worth some $94 billion. The fall illustrates the challenges facing the industry and the resulting shake-out that has manifested itself through widespread mergers, acquisitions and bankruptcies.

The firm also predicts that Germany, for several years the powerhouse behind the PV market, will this year slip to third place behind China and the US, in terms of system installations.

Sobering picture
“The conflicting trend of growing PV installation volumes accompanied on the other hand by falling revenues will challenge solar companies to continue to reduce their cost structures,” says Ash Sharma, director of syndicated solar research for the analyst firm.

“While solar installations have grown every single year without fail since we started analyzing the industry in 2006 - and will continue to do so until at least 2017 - the picture is much more sobering when one looks at industry revenue, especially as PV component prices continue downward. And installation growth, although positive, is also slowing, further affecting the industry’s overall top line.”

Another problem for many solar companies is the rapid globalization of the industry, Sharma adds. Whereas Europe accounted for more than 80% of solar demand in 2010 – thanks largely to the generous federal subsidies on offer in Germany and Italy - that proportion dropped to 53% last year.

This year, says Sharma, it will slide even further, to just 39%. Asia is now on track to replace Europe as the world’s largest source of solar installations, adds the analyst.

“Historically, solar companies could rely on Germany and a few other European countries to support their business,” Sharma noted. “But these same companies need to now quickly accelerate their entrance into emerging markets around the world.”

Germany falls to third spot
Symptomatic of that geographical shift is the German market. After a decade as the world’s leading PV installer, Germany is now expected to fall to third place in 2013, behind China and the US. Japan and Italy are set to follow in fourth and fifth, respectively.

Sharma suggests that this change in ranking is not as significant as the geographic fragmentation that is expected to escalate this year, however. The five leading geographies accounted for nearly three-quarters of total solar demand last year, but, the group’s combined share will drop to 65% in 2013.

Other markets, for example South Africa and Romania, are set to gain increasing importance globally, even with installations of just a few hundred megawatts per year.

Sharma says that the fragmentation is good news for the industry, as it will result in greater stability and less reliance on the financial support mechanisms of any individual country. “The policies emanating from a single government will now have less of a monolithic impact on the overall global solar market,” he said.

But the analysts adds that this stability will come at a price. According to him, a steadier market will compel solar firms to globalize their businesses. Required measures could mean setting up new sales and service networks, compliance with local requirements and grid codes, and navigating past what he calls the “quick-hit” markets that are present one year, but gone the next.

While the shake-out is set to continue through 2013 as the solar market’s value bottoms out, prospects do look better from next year onwards. Sharma anticipates that revenues will expand in double digits between 2014 and 2016, climbing back past the high watermark of 2011 to reach $115 billion.