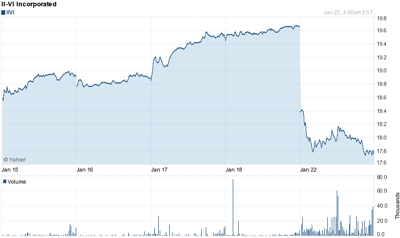 The Pittsburgh-based firm registered total sales of $125.9 million in the second quarter of its fiscal year 2013, down slightly on the same period a year ago – though bookings were up 9% to $127.1 million.

Those sales translated to pre-tax earnings of $19.3 million for the quarter, up from $15.7 million a year ago despite what CEO Francis Kramer described as an “anticlimactic” end to the quarter as industrial laser firms became more cautious.

The industrial laser sector is a crucial one for II-VI, which provides infrared optics for CO2 laser systems and components for fiber lasers, among a wide variety of product lines.

Kramer also highlighted that the recent quarter had been one of the company’s most active, with no fewer than three acquisitions completed. “Revenues from our recent acquisitions during the quarter helped to offset demand weakness that we experienced during the last few weeks of the quarter,” he told investors.

Those three acquisitions – LightWorks Optics, Oclaro thin-film filters and interleavers, and M Cubed Technologies – have provided an additional $36 million in order backlog for the company.

However, mindful of continued weak macroeconomic factors and customer caution, II-VI is being similarly cautious in its outlook for the remainder of the current financial year, which ends in June.

The firm predicts that with the full impact of its acquisitions, sales will rise in the current quarter to between $145 million and $150 million, with full-year revenues expected to come in at around $565 million. That would compare with $535 million for the year ended June 2012.

EUV component and green laser boost
On a positive note, Kramer highlighted that sales of diamond windows for use in new extreme ultraviolet (EUV) lithography tools were growing as anticipated, while the company’s Photop division is seeing rapid sales of green lasers for use in both life science and industrial applications.

In the defense sector, the acquisition of LightWorks should help to offset weaker spending by the US Department of Defense, thanks to a substantial contract with a foreign military customer. Kramer noted that although II-VI was seeing a slowdown in bookings for sapphire windows, spending on critical intelligence, surveillance and reconnaissance (ISR) technologies remained healthy.

The company’s HighYAG subsidiary is benefiting from the proliferation of high-power fiber laser technology, in particular thanks to deployments in the US automotive industry for welding applications.

Kramer is anticipating a period of customer digestion in the fiber laser space during 2013, saying: “There has been real traction but there is a lull right now as users digest [their investments].” He estimates current annual sales of high-power fiber lasers across the industry at around 1200.

Fiber laser technology has inevitably cannibalized the market for CO2 lasers to a certain degree, although Kramer estimates total annual shipments of high-power CO2 lasers at around 4000 currently.

Elsewhere, II-VI remains subject to wild fluctuations in the price of tellurium and selenium materials, which are used in infrared optics manufacture and also thin-film photovoltaics.