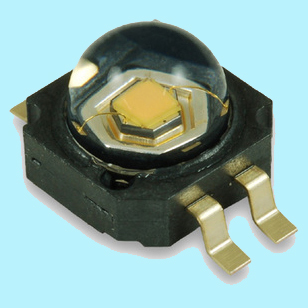 Wide ranging: there is now a range of distinct LED package formats.

LEDs are “going mainstream but are still not yet a mature commodity”, according to market analyst Yole Développement in its LED Packaging report, published last week (16 January 2013). The analyst says that the combination of growth in demand by such sectors as lighting and the further scope for LED packaging design “is good news for the entire industry.”

In the Yole report, which costs €5,990.00 for a multi-user license, the analyst says that new design and materials innovations around LEDs are providing opportunities for further differentiation, which “will continue to be beneficial for consumers, who can choose from a range of budget-friendly, environmentally-friendly and increasingly credible LED-based alternatives for replacing traditional light sources.”

Depending on the device type, packaging can represent 40-60% of an LED lighting unit’s total cost. As such, packaging represents the single-largest opportunity for cost reduction, which is necessary for the industry to be fully embraced by the general lighting market. However, Yole does not expect industry standardization to lead to the desired cost reduction.

The creativity of LED engineers and specificities of each application have led to a wide range of distinct package types and formats: single or multiple chips, low and mid-power plastic leaded chip carrier (PLCC), ceramic-based high-power LEDs, smaller or larger arrays, and chip-on-board to name a few. However, Yole cautionss that this profusion of styles is inhibiting cost reduction in LED manufacturing by multiplying the Stock Keeping Unit (SKU), thus preventing standardization of the manufacturing process and the associated economies of scale.

Considering this, LED manufacturers have reacted by developing new approaches to manufacturing, such as: design for manufacturing, which means trying to simplify and standardize components whenever possible, and pushing differentiation as far downstream as possible in the manufacturing process; and design for cost, which means focusing on cost of ownership or cost per lumen rather than end-performance.

Pars Mukish, Technology & Market Analyst, LED at Yole, comments, “Technological developments are also impacted by the quest for cost reduction, and LED manufacturers are now searching for equipment and materials with the right mix between cost and performance. Equipment and materials suppliers are proposing more and more combinations that fit these requirements, such as the use of laser-based dicers and low-cost ceramic package substrates. 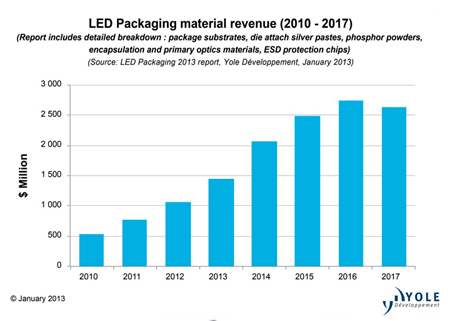 The package substrate market will reach a CAGR of 20% over 2012-2017, growing to a total of nearly $900m by 2017. And considering LED phosphors - despite strong price pressure, the associated market can also expect double-digit growth, according to Yole’s forecast, with a CAGR of 20% during the same period.

In the face of intensifying competition, diverse players are trying to differentiate themselves by proposing an increasing variety of technology options for LED packaging. Substrate material options as well as assembly and interconnection techniques abound as many companies work around the limiting patents of the established players.

New players from the general semiconductor markets are proposing new solutions based on their respective capabilities. Similar to IC packaging, new technologies for LED packaging mimic the existing ones, without completely phasing them out - and there is still a lot of room for innovation, which could lead to more added-value. For such products, however, it remains paramount that the solution offers LED manufacturers an overall reduction in cost of ownership.

At the LED packaging equipment level, growth will return for the next three years. Pars Mukish adds, “The LED packaging equipment market, which stagnated in 2012 due to industry oversupply, is growing again and will peak at nearly $650m by 2016.” LED packagers are still using mostly retrofitted equipment from the IC industry and relying on existing technology solutions and materials to improve LED cost of ownership and performance.

While this has allowed LED manufacturers to benefit from decades of R&D, and investments in the IC industry, it also limits the industry to a space defined by existing technology platforms, which are not optimized to the specific needs of LEDs. However, the industry has gained enough momentum in 2011/2012 to entice equipment and material providers into developing dedicated solutions for LED manufacturing.