However, manufacturers will mostly remain in the lab, says Lux Research. 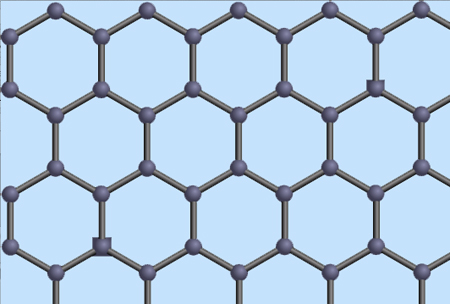 A hex on graphene? Lux asks whether it will reach its full potential.

Graphene, touted as the next wonder material because of its extraordinary properties, will grow to become a US$126 million market in 2020, from its $9 million base in 2012, according to analyst Lux Research.

However, while this seems to be an impressive debut for a relatively new material, this growth rate is actually “less than some of the hype may suggest”, the company cautions.

The bulk of the potential graphene market will belong to graphene nanoplatelets (GNPs), which are used mainly in composites and energy storage applications. However, graphene films, despite being a "hot" research area, says Lux, will be delayed by a slew of technical and economic challenges.

Ross Kozarsky, Lux Research Senior Analyst and the lead author of the report entitled Is Graphene the Next Silicon... Or Just the Next Carbon Nanotube?, comments, "The rocky history of carbon nanotubes shows that a research and patent boom along with impressive technical performance is far from a guarantee of commercial success. Major challenges like high costs, processing issues, and competing materials loom large.”

Lux Research also positioned graphene technology developers on the "Lux Innovation Grid", based on their Technical Value and Business Execution. Companies that are placed in strong positions on both axes achieve a place in Lux's “Dominant” quadrant. The company also assessed each company’s maturity, and provided an overall Lux Take. Among Lux’s findings:

1. XG Sciences and Vorbeck lead the pack. Assessed by Lux as "Dominant", XG Sciences and Vorbeck Materials will continue to rule among GNP start-ups, albeit with different commercialization tactics. Vorbeck has moved down the value chain into selling higher margin conductive inks, while XG supplies GNPs to corporate channel partners.

2. Too early to tell on second wave of start-ups. Newer start-ups such as Graphene Technologies, Grafoid, National Nanomaterials, Xolve and Haydale – have entered the landscape with bold claims of cheaper and better graphene. All are still ranked by Lux as “High-potential” or “Long-shot” with a lack of solid traction in any application.

3. Films face significant hurdles. Graphene films companies such as Bluestone Global Tech, Graphene Frontiers, Graphenea and Graphene Labs still face commercialization challenges. All are at the low end of the business execution spectrum, and a true leader has yet to emerge.

The report, titled Is Graphene the Next Silicon... Or Just the Next Carbon Nanotube? is part of the Lux Research Advanced Materials Intelligence service.