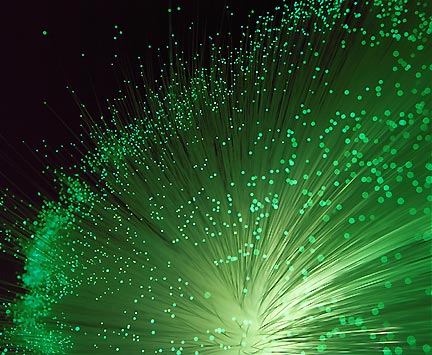 Optical communications and IT services provider NEC Corp. of America and fiber developer Corning Inc., have announced what they are calling “record-breaking results in transmission capacity over optical fibers”.

The result was first reported at the OSA’s Frontiers in Optics/Laser Science XXVIII (FiO/LS) meeting, held in October 2012.

The partners commented, “As the foundation of telecommunications networks, optical fiber innovation enables carriers to cost effectively keep up with ever-growing traffic demands.”

The fiber designed by Corning researchers has cores arranged in a triangular lattice, which enables transmission over a large number of spatial modes. By combining spectral multiplexing with polarization and spatial mode multiplexing and employing multilevel modulation formats, NEC researchers achieved the total spectral efficiency of 109 bits/sec/Hz, while the aggregate transmission capacity was 1.050 Petabit/s, which the partners claim is the highest capacity over a single optical fiber reported so far.

“We recently demonstrated the highest capacity over single mode optical fibers, and now we have opened new frontiers with the highest transmission capacity over any type of optical fibers. We are proud to lead industry efforts with Corning and to provide solutions that will be the foundation of the next generation of networking.”

The NEC/Corning announcement follows that of NTT and three partners, who reported “ultra-large capacity transmission” in September 2012 of 1 petabit per second over 52.4 km of 12-core (light paths) optical fiber.

The NEC team said at the time that its achievement indicated that transmission of one petabit per second – capacity equivalent to sending 5,000 HDTV videos of two hours in a single second – would be possible over 50km, a typical distance between “medium-haul telecom offices”.

That achievement was reported as a post-deadline paper at the European Conference and Exhibition on Optical Communications (ECOC) 2012 held in Amsterdam, Netherlands, between September 16-20, 2012.