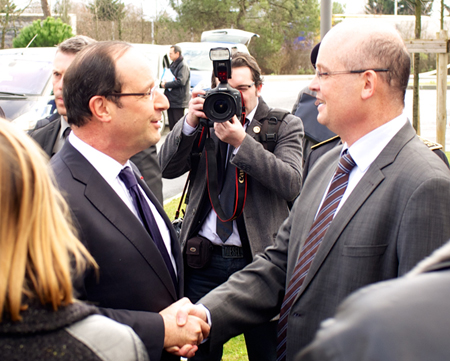 French President François Hollande praised the innovation of femtosecond IR laser system developer Amplitude Systèmes, during a walkabout at the company based near Bordeaux on 10 January.

The President was making a tour of Aquitaine, Western France, where he also visited an aerospace and a polymer company, following the invitation of regional leader Alain Rousset, a “digital champion” keen to promote his territory’s hi-tech capabilities. The President spent time in Amplitude’s production facility, and held informal exchanges with staff.

On the occasion, Amplitude announced a program of investments for the future, including research and technology transfer. Vincent Rouffiange, the company’s VP Sales, commented, “Besides developing sales of our products we are also working on various research projects with universities, so we are also involved with the applications.”

One example is a project with the University of Eindhoven to make a printer for lab on a chip developments, in a project called Femtoprint, which started in 2012.

Rouffiange later told optics.org about the company’s recent dramatic expansion: “Amplitude began as a start-up from Bordeaux University in 2001 with just two people. We have been financially supported by the regional government and our success has led to significant growth so we now employ 85 people working on the development of ultrafast femtosecond infrared lasers.”

“When we started there was not really a market for these products but we recognized that it would grow. After five years or so it began to develop with applications initially in ophthalmology and in micro-machining, especially in semiconductor manufacturing. We believe that our growth over the past several years has been enhanced by our substantial reinvestment of profits into the business.”

Amplitude Systèmes has had a presence in the USA for the past five years with sales offices in Boston and in San Diego. The company also has a sales office in Taiwan and plans to open a new site in South Korea during 2013. 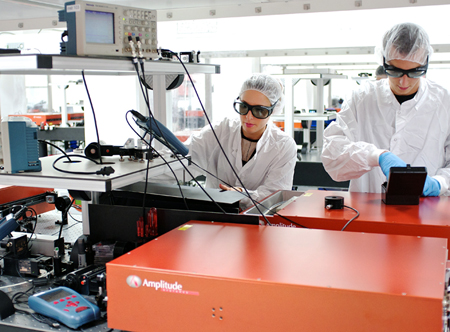 In December 2012, the company was presented with the 2012 Intellectual Property Award by France’s National Institute for Industrial Property (INPI), which makes annual awards of prizes for “outstanding companies for their R&D and innovation risk taking, their Intellectual property strategy and their international development”.

Rouffinage added, “We were recognized for our high-level R&D, coupled with industrial innovation and design. INPI cited the Satsuma laser as a prime example of such innovation. The INPI award followed the 2012 Prism Award presented earlier last year in San Francisco for “best industrial laser”.