Go-ahead confirms that €1.38 billion will be invested in technology development for future EUV and 450 mm wafer systems. 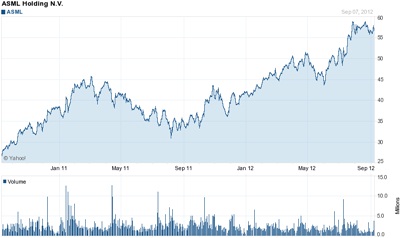 Shareholders in the semiconductor lithography specialist ASML have approved a plan that will see more than a billion euros invested in the future development of the company’s technology.

At an extraordinary general meeting held on September 7 at the firm’s headquarters in Veldhoven, The Netherlands, shareholders agreed a deal that will see key customers Intel, Samsung and the Taiwan Semiconductor Manufacturing Company (TSMC) foundry take a combined 23% equity stake in ASML.

In return for that shareholding, the three chip makers have agreed to pay €3.85 billion in cash, which will be returned to existing ASML shareholders in the form of a special cash payment later this year.

In addition, the companies have pledged to invest €1.38 billion towards the development of future lithography systems that will feature high-power extreme ultraviolet (EUV) light sources and be suitable for patterning 450 mm silicon wafers.

The investment won’t immediately impact the development of ASML’s first wave of EUV lithography tools – the company is due to deliver the first production-worthy EUV tools to customers in early 2013, with volume chip production slated to begin the following year – although it does provide a long-term vote of confidence in a technology that has taken decades to transfer from the laboratory to the semiconductor fab.

ASML had first announced the scheme back in July, with Intel the first customer to sign up. The Californian chip maker will ultimately take a 15% equity stake in ASML. TSMC agreed a deal to take a 5% share shortly afterwards, while Samsung is purchasing a 3% stake.

ASML’s CEO Eric Meurice also stressed that the technologies would be developed on an open basis, and not just restricted to the three customers taking part in the equity plan.

“At the end of the day, this is done as a way to secure Moore’s law,” he said. “There is no privilege to our [investing] customers, except that their investment is compensated by the equity.”

Meurice also explained that the investment would help to develop the “2018 version” of EUV lithography tools, which would require significantly more EUV power and larger optics – as well as compatibility with both 300 mm and 450 mm wafer platforms.

With US anti-trust clearance for the agreement also now in place, ASML expects to issue new shares to Intel and Samsung on September 12, while TSMC will receive its new shares at the end of October.

In early December, the cash paid by the three companies for their equity stakes will be returned to ASML shareholders in the form of a special capital repayment. For every 100 shares that they currently own, those existing shareholders will receive €918 in exchange for giving up 23 shares – meaning that each share has been valued at just under €40.

ASML’s shares are currently (as of September 10) trading at close to €57, with the company’s market capitalization having doubled over the course of the past year.