Director of US Joint Technology Office says laser weapons have moved well beyond the realm of science fiction. 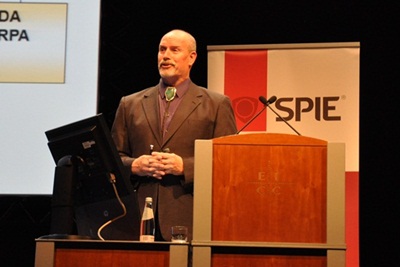 The Joint High-Power Solid-State Laser (JHPSSL) system developed by Northrop Grumman is to be tested by the US Army within the next two weeks, in a further sign that high-energy lasers are maturing as a future weapons technology.

And that future may arrive sooner than may realize. Mark Neice, director of the Albuquerque-based High-Energy Laser Joint Technology Office (HEL-JTO), told delegates at SPIE Europe’s Defence + Security symposium in Edinburgh, UK, that such systems were “not something that’s five years out, not ten years out, but we hope that within the next couple of years we will demonstrate significant military utility of this laser weapons capability”.

That’s despite a large decrease in the overall funding for laser weapons development in the US, which has fallen from more than $1 billion per year while the expensive Airborne Laser Testbed was being funded, to around only $300 million per year in the near term.

Plenary speaker Neice, a retired US Air Force colonel who previously worked on the Airborne Laser Testbed, said that now was an exciting time for high-energy laser technology advancement, and that the HEL-JTO had high hopes in particular for the Robust Electric Laser Initiative (RELI), a project seeking to increase the electrical efficiency of laser weapons systems to make them more practical for deployment by the US Army, Navy and Air Force.

JHPSSL ready for testing
In the immediate future, attention will focus on the forthcoming JHPSSL tests. Building on the January 2009 demonstration of a 105 kW output from a laboratory-based system by Northrop Grumman utilizing multiple laser “chains” based on master-oscillator power amplifier (MOPA) designs, Neice said that "first light" of an eight-chain system at the US Army’s White Sands Missile Range should be achieved by mid-October. By the end of the year, the system should also have completed its first high-power demonstration.

That laser has shown excellent technical capability, for example producing a series of three 100 kW bursts of power within the first 20 seconds of being switched on. But with 500 kW of electrical power needed to run the system (JHPSSL has an optical conversion efficiency of around 20%), most of the power is lost as waste heat and it requires a huge cooling system. As a result, the JHPSSL is not suitable for so-called “tactical platforms” such as integration with armored vehicles.

Neice added that a major challenge with the JHPSSL system was to construct an environmental enclosure to house the laser – something that has taken nearly as long as building the laser itself.

Highlighting the capability already shown by high-energy lasers in a series of videos demonstrating how UAVs, boats and mortars have been tracked and disabled at remote stand-off distances, Neice said that such weapons now offered a very real potential for capability across the three armed services.

The demonstrations are being used to convince policymakers in Washington, DC, that laser weapons have moved well beyond the realm of Star Wars, Neice added. "These are real capabilities that are being demonstrated on real targets of interest," he told delegates.

Aero-optics challenge
The US Army and Navy will be the first to use such systems. Although the US Air Force has been heavily involved in earlier programs, notably the Airborne Laser, tests have shown that travelling at supersonic speeds has a highly detrimental effect on laser beam quality. 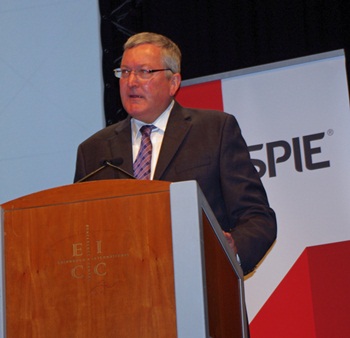 That is of particular concern when airborne, because the laser weapons would need to operate at much longer stand-off distances than those at sea or on the ground. Whereas a 5 km range could be highly effective on the ground, that kind of distance is travelled by a fighter aircraft in just a few seconds.

Further basic research is required to understand that so-called “aero-optic” beam distortion, and as a result the US Air Force is unlikely to be deploying any high-power laser weapons before 2018 at the earliest.

Other technical difficulties include the thermal distortion of the beam caused by excess heat that is common to all platforms, while the cost of single-emitter laser diodes are still far too high for Neice’s liking.

But with disabling of targets including UAVs and mortars now becoming a regular occurrence with a variety of systems, it appears that the era of laser weapons is fast approaching.

The event was opened officially by Fergus Ewing, (left) the devolved Scottish Parliament's Minister for Energy, Enterprise and Tourism.