Mixed fortunes for II-VI at end of tough year

After a fiscal year in which it was hit by slumping metal prices and floods in Thailand, II-VI reports mixed demand trends. 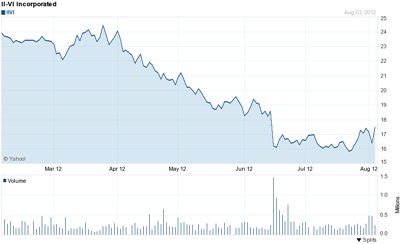 The diversified optics and materials company II-VI has reported sales of $534.6 million for its fiscal year ending June 30 - an increase of 6% on the figure posted for the previous year and in line with its most recent forecast.

However, the end result was significantly lower than the firm’s original expectations for annual sales of around $600 million, after a tough year in which II-VI was hit by a combination of severe flooding in Thailand last October, and the plummeting price of selenium and tellurium metals.

Just over a year ago, II-VI acquired Aegis Lightwave, a move designed to add to the company’s presence in the optical telecommunications and fiber laser markets, and boost its top-line revenues. The deal cost II-VI around $52 million, but within months the division’s contract manufacturing partner Fabrinet saw one of its main facilities flooded.

OEM weakness
Although II-VI has recovered from that setback, and Aegis is now back to normal operations, CEO Francis Kramer told an investor conference call that a number of its customers were now becoming more cautious because of worries in Europe and less robust economic growth in China than had been predicted earlier this year.

Among other things, II-VI is a key supplier of infrared optics used in high-power lasers for materials processing applications, and Kramer said of the European market:

“We are starting to see signs of unfavorable economic conditions affecting the high-power [laser] OEMs.” The CEO also reported a significant reduction in orders from its largest single OEM customer in China, but added that it was making encouraging progress in the region as it worked to engage with new customers.

“Our infrared optics business segment, including HIGHYAG, continues to see bookings pressure driven by worldwide economic conditions that have impacted our business over the past several weeks,” Kramer said. “The reduction in laser utilization has impacted Asia, while US and European markets have been flat.”

EUV optics and green laser boost
Despite that cautious tone, Kramer also said that II-VI had seen some encouraging pockets of demand in other applications. One of those is the progress towards commercialization of production-scale extreme ultraviolet (EUV) lithography tools.

These tools use extremely high-power CO2 lasers to generate the EUV radiation, and II-VI has developed some high-specification optics to handle the 30 kilowatt powers required. Sales of the special diamond windows should be strong in the coming quarters, Kramer said.

Meanwhile, business within II-VI’s “Photop Technologies” unit is said to have surged in the most recent financial quarter after the company began making production-scale deliveries of its 532 nm green laser diodes.

Kramer added that the “VLOC” precision optics unit had enjoyed a 250% sequential surge in bookings, while a new military countermeasures system for defeating ground threats to aircraft was also providing a boost in demand for the division’s YAG slab crystals.

Metal prices
Overall, said Kramer, fiscal 2012 has been “filled with challenging events”, not least the recent slump in pricing for tellurium and selenium materials that II-VI both sells and uses internally in products such as zinc selenide optics and bismuth telluride thermoelectrics. The price slump hit II-VI’s fiscal 2012 profits by an estimated $8.3 million, said the company, dragging full-year net earnings down to $60.3 million. For fiscal 2011, the figure was $82.7 million.

But with some of those difficulties now behind II-VI, Kramer is expecting the company’s sales to grow by around 8% in the current year, to reach between $573 million and $583 million.

Analysts appeared to be happy with that estimate, even if the current quarter of the financial year does look like it will be weaker than they had been expecting. One analyst, Mark Douglass from Longbow Research, wrote in a research note on the firm:

“II-VI should see a recovery in sales and margins as telecom improves [and as it] launches new products in fiscal 2013, and it puts the severe material price drops behind it. We think II-VI has a solid track record of execution and deploying its cash flow smartly, and is a compelling buy, trading at historically low levels.”

“In addition, the company should continue to apply what we view as a strong balance sheet towards strategic acquisitions.”