The digital imaging specialist is expecting a huge increase in sales during the current quarter for next-gen smart phones. 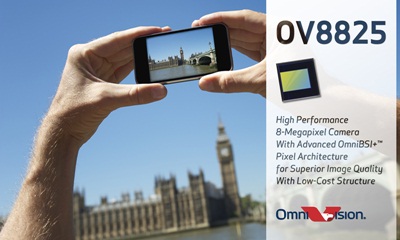 OmniVision, one of the leading suppliers of image sensors for consumer applications, is predicting a massive increase in sales over the next few months – fueling speculation that its products will feature inside Apple’s highly anticipated “iPhone 5” smart phone.

In its first quarter of fiscal year 2013, which ended July 31, Santa Clara-based OmniVision reported a solid enough increase in sales, which were up 18% sequentially to $258.1 million.

But the company has also invested more than $100 million in a huge build-up of product inventory that is designed to meet escalating demand from “top tier smart phone OEMs” over the coming months, as consumer electronics firms gear up for the usual Christmas holiday rush.

Based on current trends, sales in the quarter ending October 31 are now expected to reach anywhere between $355 million and $390 million – representing sequential revenue growth of as much as 50%, and fueling rumors that the company has won back a slot with Apple for the forthcoming “iPhone 5”.

Omnivision’s sensors had featured in the iPhone 4, but the company lost out to Sony in the popular iPhone 4S follow-up model, hitting sales.

New “low cost” smart phone opportunity
While the rapidly growing smart phone market is obviously a crucial one for OmniVision and other optical sensor providers, especially in the months leading up to holiday season, there are many other emerging market opportunities across the consumer electronics, medicine, security and automotive sectors.

Ray Cisneros, OmniVision’s senior VP of sales, also highlighted a new market for “low-cost” smart phones that is starting to emerge in Asia. In an investor conference call, he described that market as an “enormous business opportunity”.

On the negative side, although OmniVision will see rapid sales growth in the coming quarter, those additional revenues will not translate to greater profitability – in fact the forthcoming quarter could result in one of the company’s weakest as far as gross margins are concerned.

That appears to be a result of the high cost of producing new “BSI-2” sensor products, which are the first to result from OmniVision’s transition to manufacturing on a 12-inch wafer platform. The cost of the new equipment required and seemingly intransigent suppliers is restricting the company’s ability to make money in what ought to be a particularly lucrative period for OmniVision.

CEO Shaw Hong told investors that negotiations with suppliers to cut those costs were ongoing: “We are aware of the margin issue and we are doing everything we can to go through negotiations [with] vendors.”

“While we are successful in rebuilding revenues momentum, our gross margins remain under pressure as a result of our current cost structure,” he added. “We continue to take actions that we believe will lead to margin expansion over time.”

Despite that margin squeeze, Hong and colleagues say that the company will continue to increase their investment in research and development activity, which they see as the key to establishing and maintaining a lead ahead of rival suppliers.

Recent hiring of additional R&D staff is slated to continue in the current quarter, with CFO Anson Chan noting: “We believe that our investment in R&D is the leading differentiator for company and we will continue to do so in a controlled and targeted manner.”

The latest fruits of that R&D effort include a lower-cost 5 megapixel camera for smart phones and tablets, and an ultra-compact 2.4mm x 2.3mm VGA camera chip designed for front-facing phone and tablet uses.

Both products are based on OmniVision’s “BSI+” technology platform, and are scheduled to enter mass production early next year.